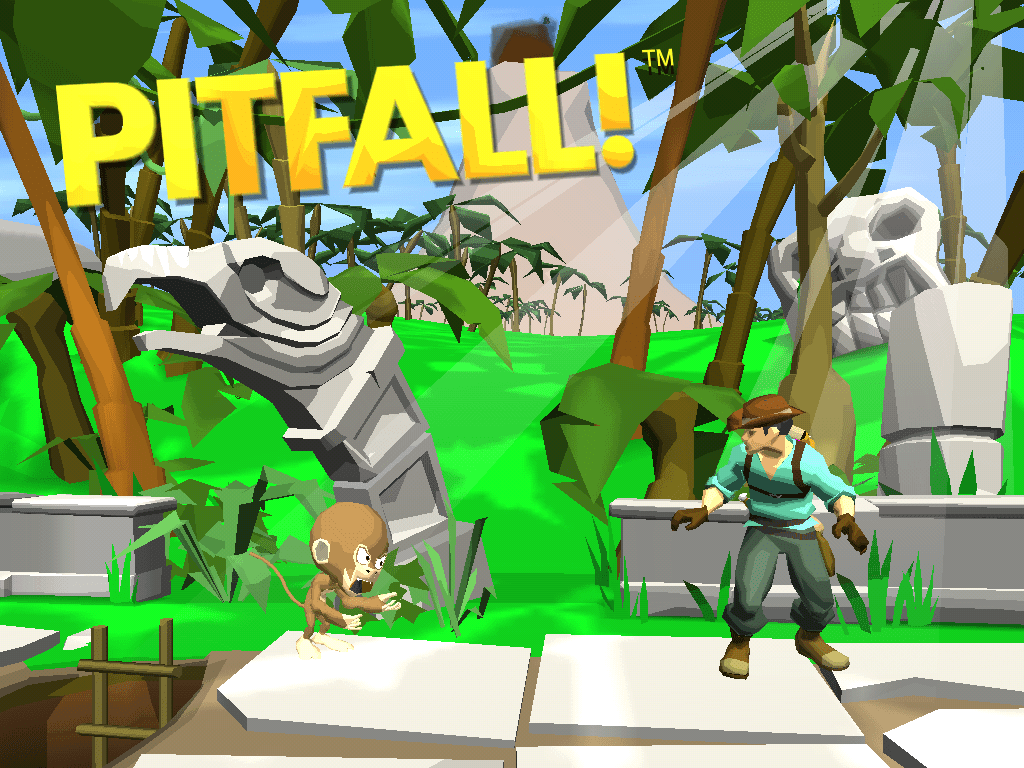 This game plays perfectly on iPad 2. I’ve noticed on my iPhone 4 the swipe responses aren’t very good. Also its harder to see hazards in the 2d side-scrolling view. Play it on the iPad2 an up.

Ugh…. I’m so torn here. It’s a fun game and really lives up to the tagline on the product page of  the “free runner” evolved!  It’s a fun time waster that pretty much goes on forever and you just play to beat your own or your friend’s scores. The different environments and the amazing fast paced adventure keep this in recommend zone.

The “retro HD” graphics are really sharp and pretty. The graphics run as smooth as butter. With all of the explosions and camera changes,this feels like a premium game that could very well be playing on my plasma from my X-Box 360.

It feels like the game studio set to make an amazing new game that raises the bar on the genre but then was told when they were almost done with it, to shove in app purchases in. Unfortunately it’s the constant spamming you have to endure that refuses to let you forget about the in app purchases available and that takes away from the fun. One of the highlights of the game is the checkpoint system, a system that is almost crippled by having to buy tokens that take forever to earn with in game currency. Of course you can buy the one time two dollar currency doubler or the single use gems. You are going to be reminded of that fact every single time you die. 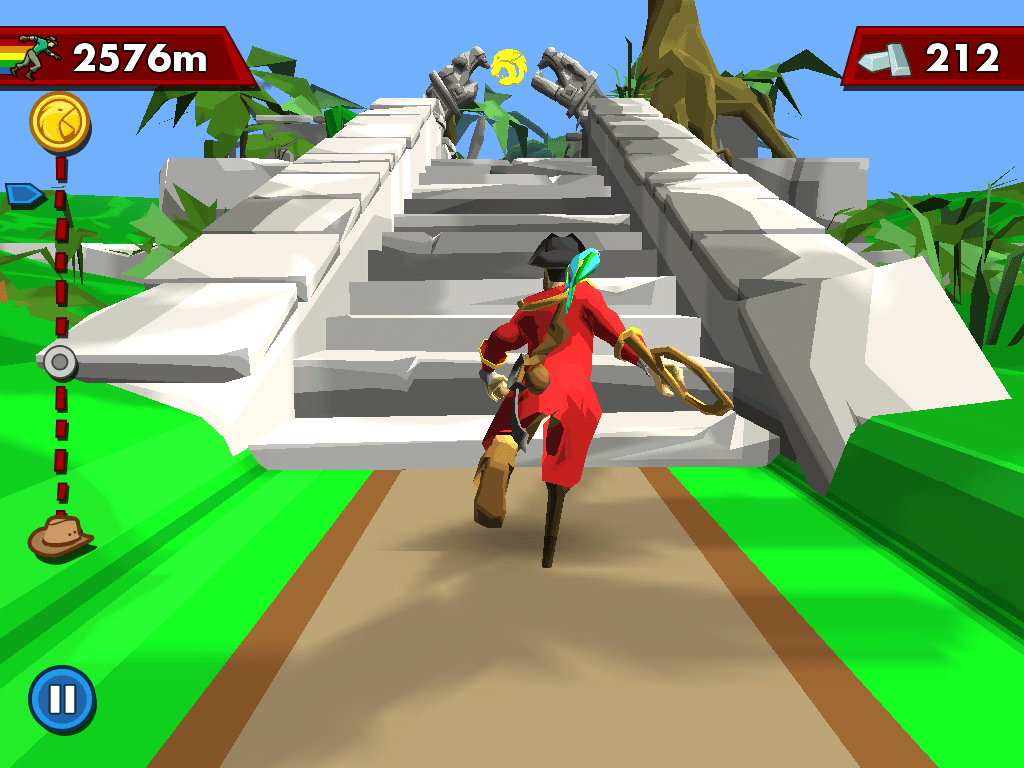 Great. Like I said above, you can tell the developers were putting thought and care into this. The controls are tight and the character animations and the world around you draw you into this fast paced adventure. There is no lag whatsoever on my iPad 2. As fast as this game gets I’m really thankful for that. Every once in a while I feel like a whip tap doesn’t register, but it doesn’t happen often enough to be a problem.

The music is epic and the camera angle almost never gets in your way. In fact it makes you feel as if you are controlling this epic chase scene in some classic adventure flick (ahem “Indiana Jones”).

The game is all about memorizing…the hard way. Every time you get to a new area, there is a new way to avoid death. You get to find out by dying, swiping up and dying again, then swiping up down, left and right until you don’t die.  Victory…Until there is a new area and way to die.

Thankfully, it is all doable and there is definitely that feeling of progression. The randomized way of getting to the new areas definitely keep things from getting boring. It’s hard to believe the game is just a dollar what withthe ability to jump right back into the action after you fail, the fluid way my character moves on screen and the insane detail to the animation and sound. Well for more on that, check out the No Like section. 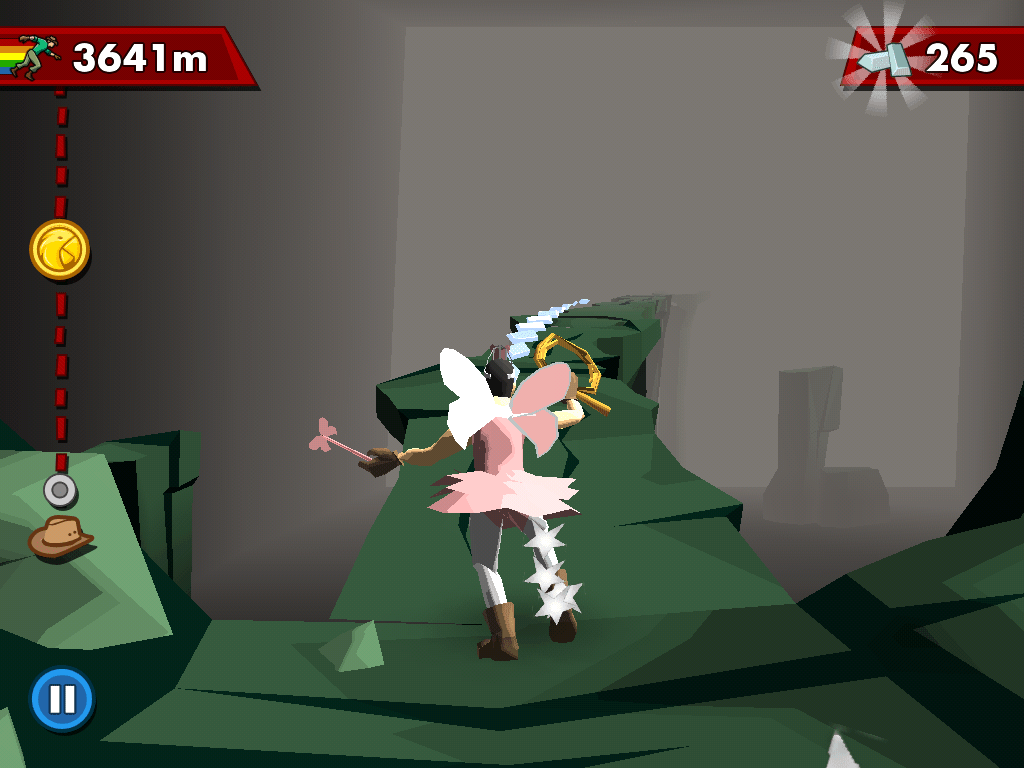 Why yes, I am a fairy 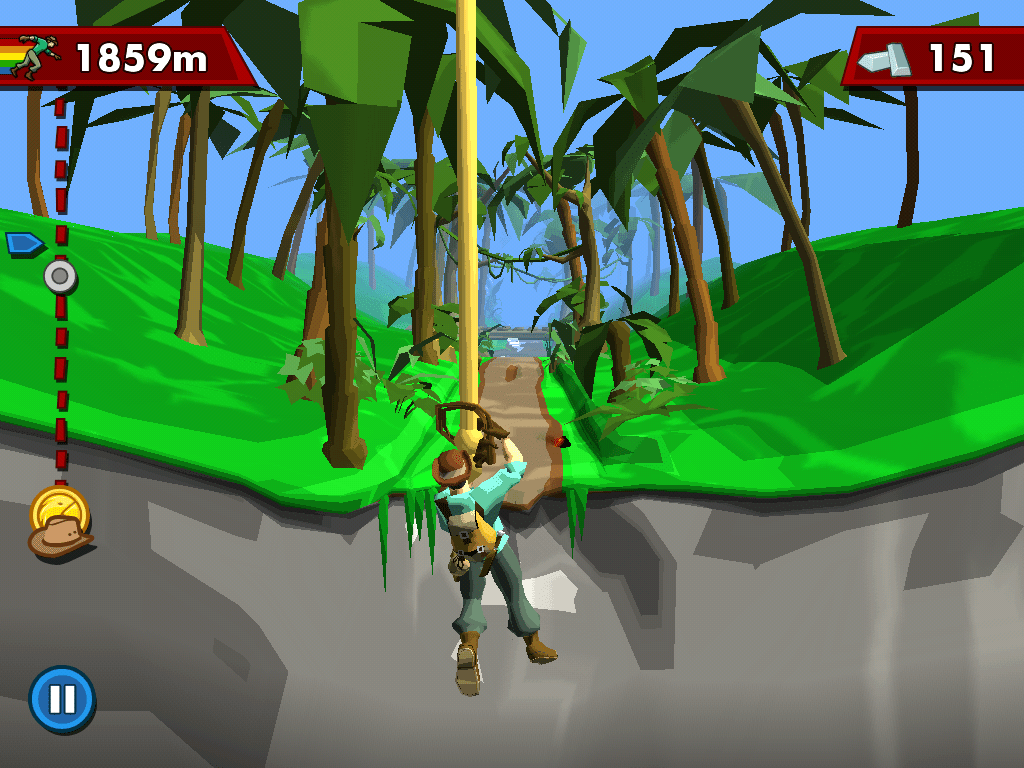 The most cinematic gameplay yet on the iPad. You are the star of the epic chase scene in the movie. When it gets hectic, I am filled with excitement and tension. The great controls, the really detailed environments, the many hilarious costumes, the culmination of every endless runner before it, this game oozes quality..  Flat out, it’s just a darned great endless runner that raises the bar.  Honestly, despite all of the problems I have with it, and I do have a bunch of them, this gets my full recommendation.

It’s mostly randomly generated. There are areas that you visit in a set order, but the paths there and the areas themselves are random. This keeps you with that linear feeling of progression but the tension and excitement of never playing the same map twice.

The game is more about beating your score, getting upgrades and new costumes. The progression is definitely there as you notice yourself going further and further. There are also games center and in game achievements.

My first goal of the game was the pirate costume. The more you run, the more points you make. The more points you make, the more your character gains experience, and with it you level up. The only thing leveling seems to do is provide you with a few more gems. Those gems can be used to purchases a few upgrades: single use potions or things to help you live longer, check point tokens and best of all costumes.

The costumes are great!  So far I have the pirate and the fairy costumes. Your character runs differently with both and even says different things at times. The way Pitfall Harry runs with his arms stretched out in the fairy costumes reminds me of a little girl running across a yard screaming “IM A FAIRY!!!”  It’s hilarious.  Pirate Harry, runs with a limp from his wooden leg and says “Arrrg” every time he lands from a jump. 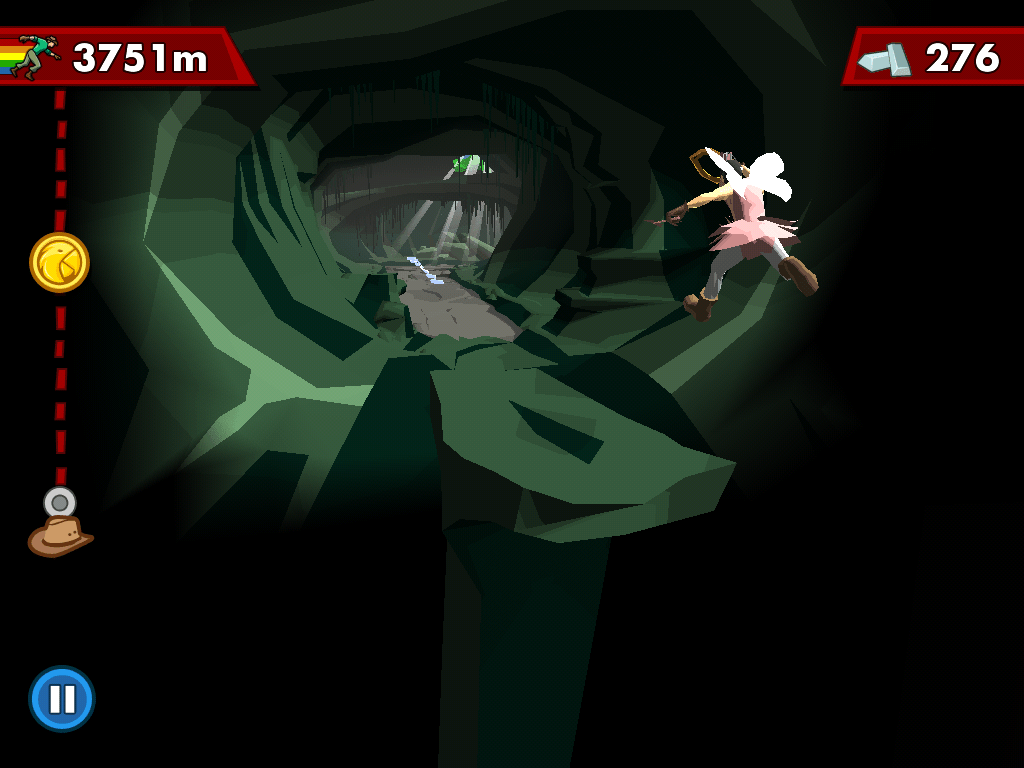 You can get new outfits with in-game currency earned or bought. 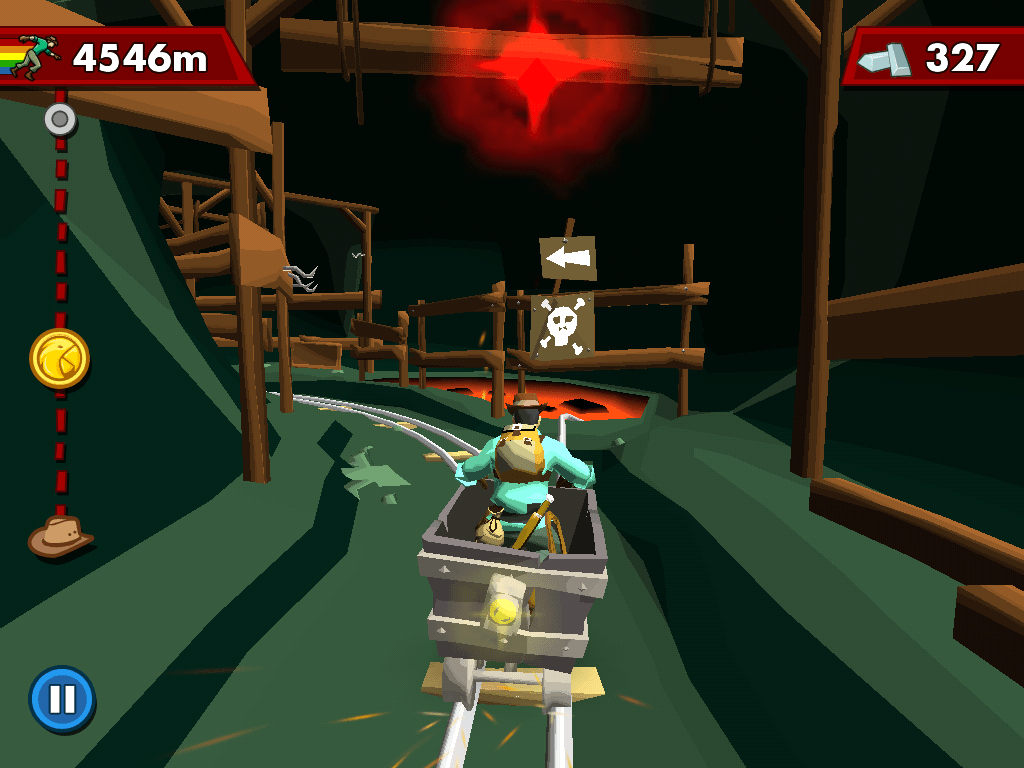 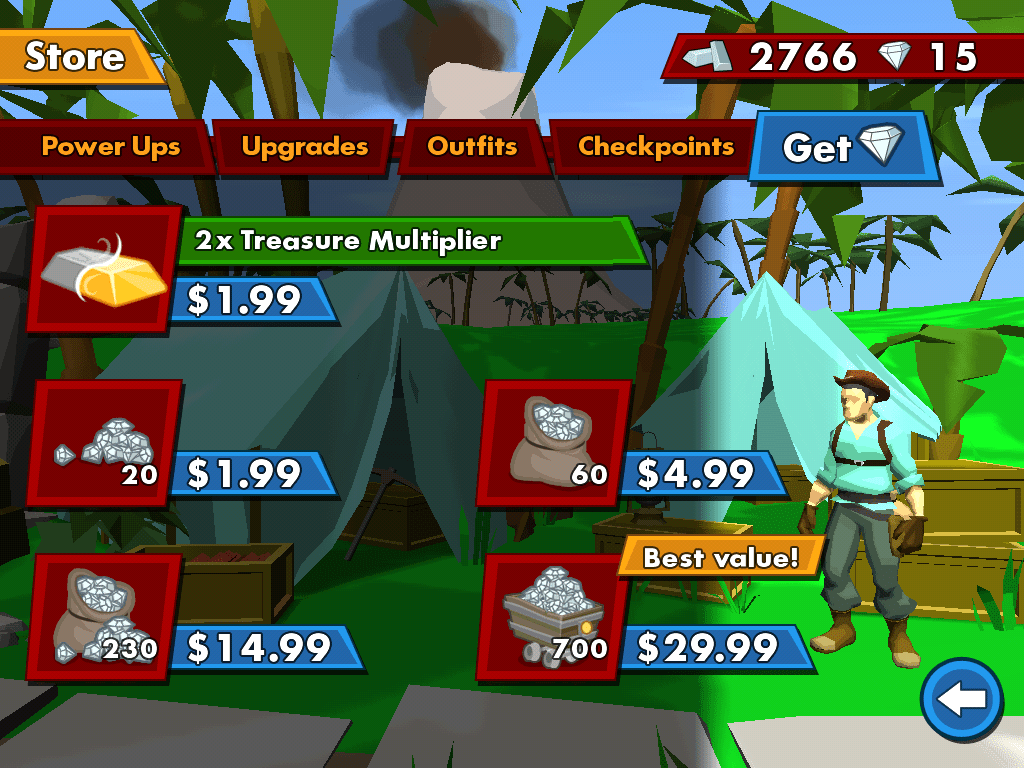 The in-app purchases…The bad kind. You are bombarded very often with pop up ads to buy gems or tokens. You don’t need to buy anything, but the way its set up, if you don’t it takes a really long time to earn enough for anything. In fact one of the first ads you see is to spend two real dollars to turn the silver currency bars gold to double their value. I’m sorry but no. That just screams cheap money grab. I would have rather have been told to pay three bucks up front than to be nickel, dimed and spammed this much for a game that I have already paid for. 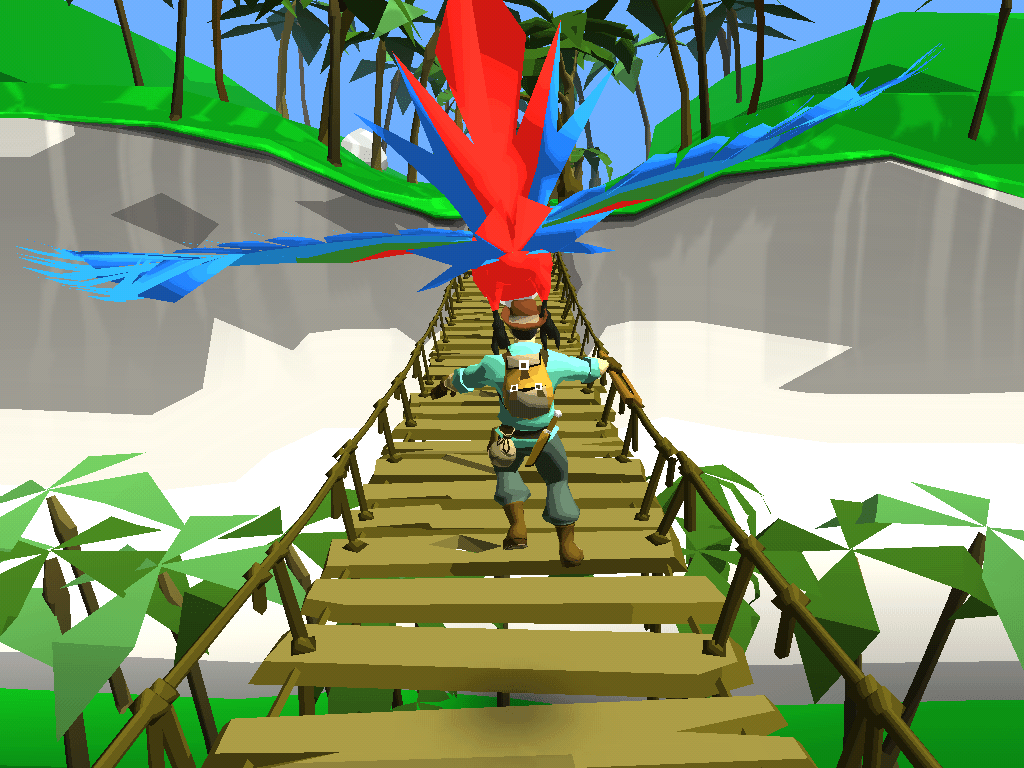 Parrots carry you to your checkpoints

The checkpoint system, One of the best features of the game, has also been turned into an unfortunate money grab. If you have tokens you can restart after you have failed or died at the last checkpoint that you have passed. That sounds great! Unfortunately the tokens cost six thousand for ten.  Now for a game that’s basically, die, learn, get further, rinse and repeat, you are going to die a lot. But unless you spend the two additional dollars to “Upgrade” your silver bars to gold it’s going to take a very long time to earn enough to buy those ten tokens.

Honestly it wouldn’t be that big of a deal if you weren’t reminded every single time you died without tokens. See the pop up below: 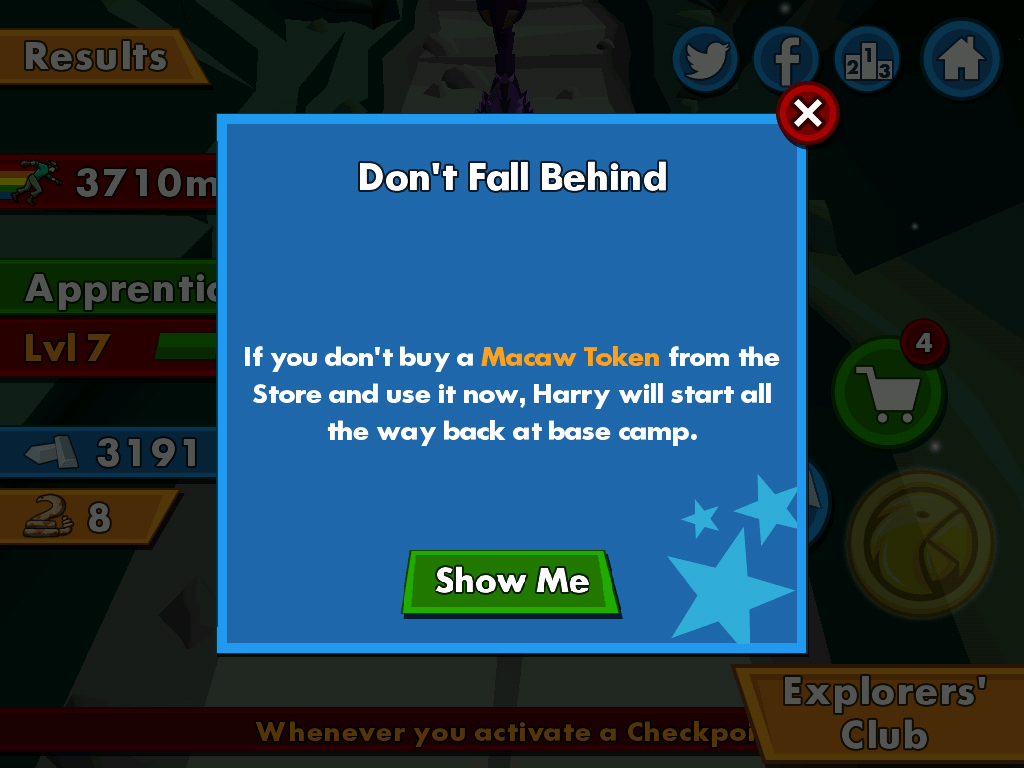 It’s frustrating. It cheapens the great feeling of progression you get every time I make it a bit further to then have to see that pop up when I lose and hit the restart from scratch button.

Because honestly, once you get more comfortable with the game you can make it further faster. It’s fun. It’s progression at work and it makes the game so much fun. But the fact that the game purposely doesn’t drop very much silver in front of you, you know it’s just a money grab for gems or that two dollar “upgrade”.

Honestly I’d rather use my gems for the upgrades and the costumes. Unfortunately, it takes a while to level and when you do you might get between 0-3 gems. When you do buy an upgrade the price for coins and gems multiplies to ludicrous levels. 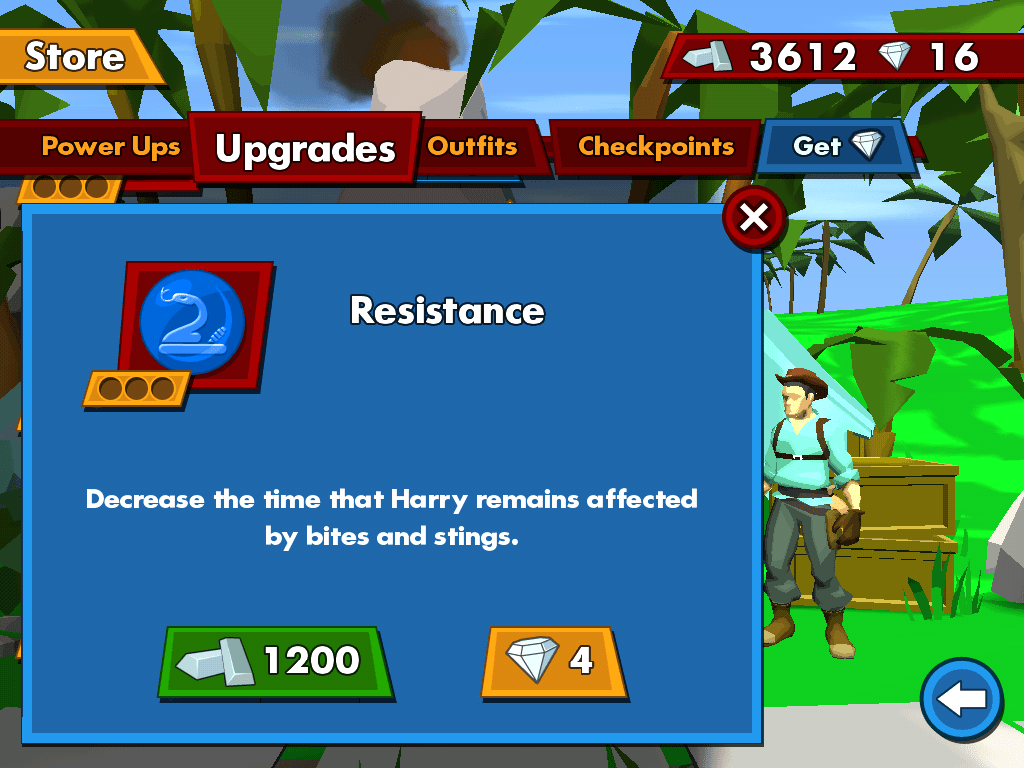 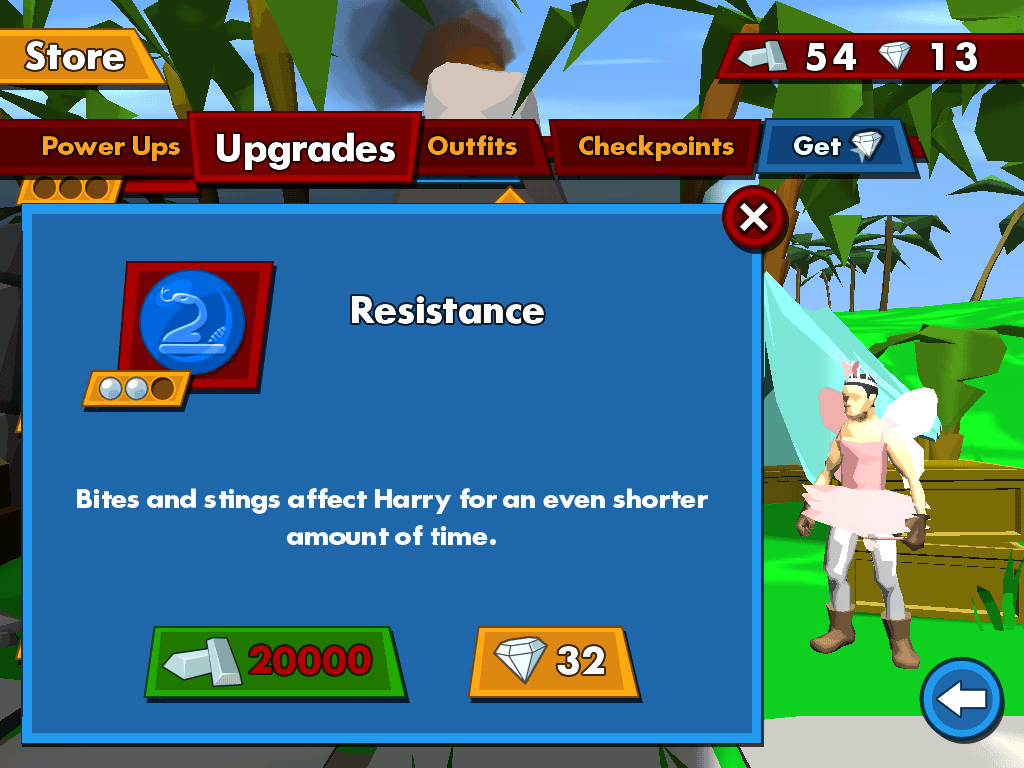 Despite everything in the no like section, I still like the game enough to be playing it obsessively..  I still recommend it to anyone who loves endless runners, games that demand your full attention and great action sequences. It’s just fun. Sure its weighed down by greed, but it isn’t broken. It says a lot in my opinion about the development team that they can make such an amazing game that makes the spamming of in app purchases worth it.  Just be sure to have in app purchase setting off if you hand this over to a kid.

In the end it’s only one dollar.  That’s worth the price of admission for the best running from an exploding volcano action game I control game/ movie experience.

Tips and Pics below:

On the Mine Cart: 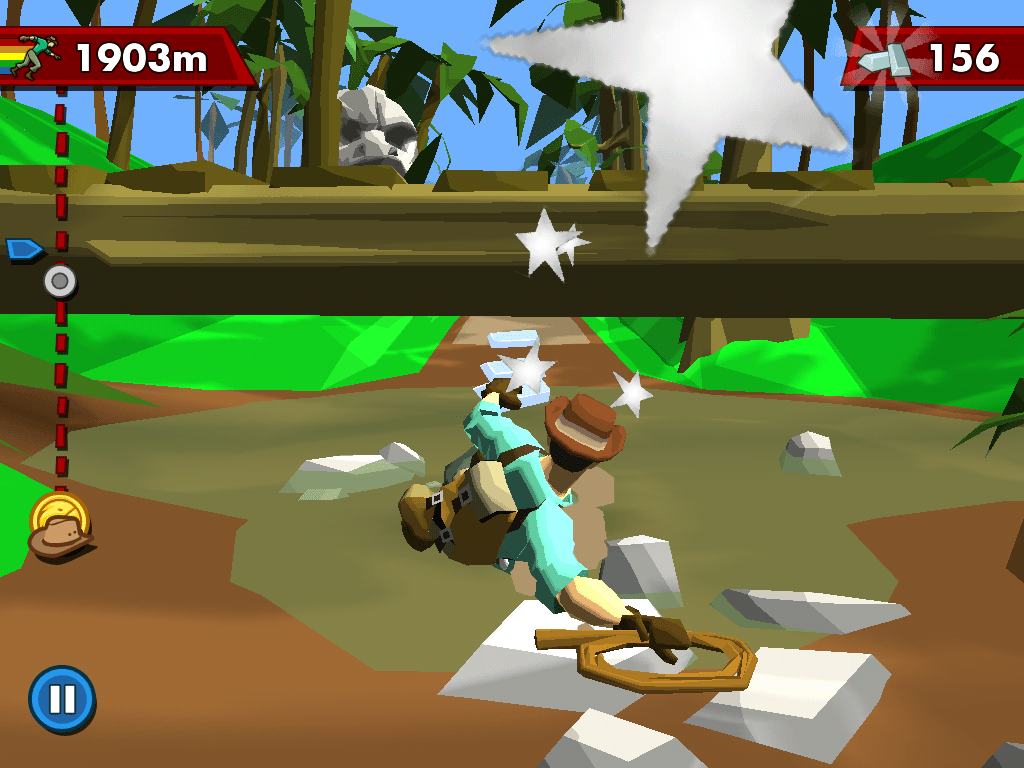 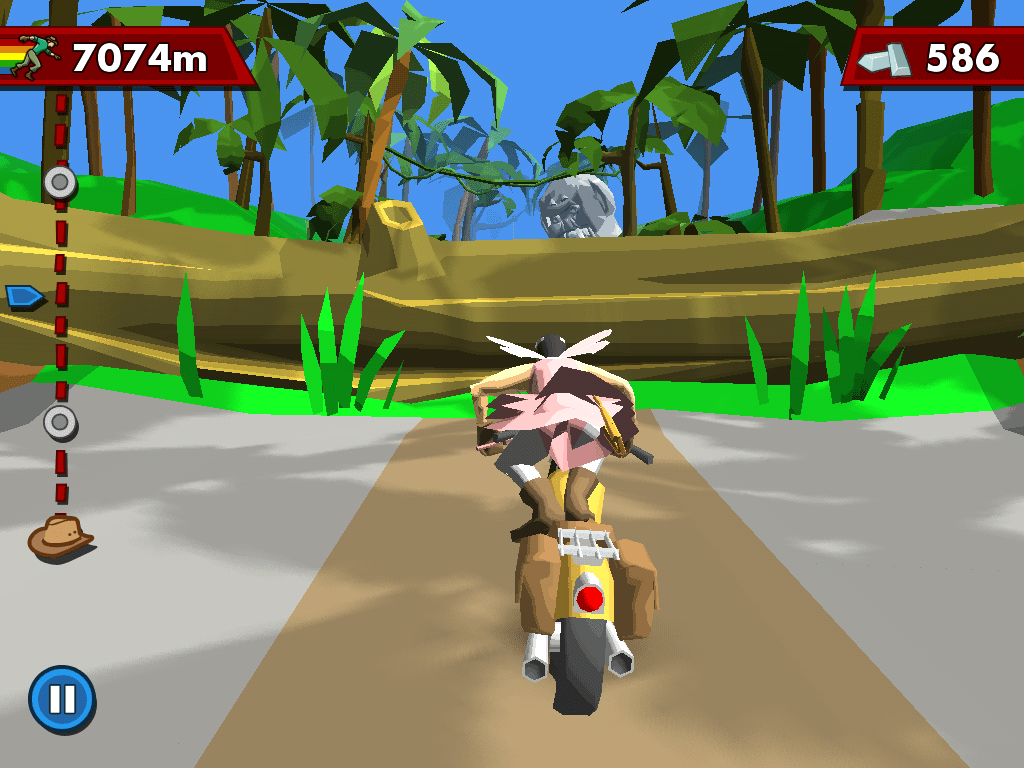 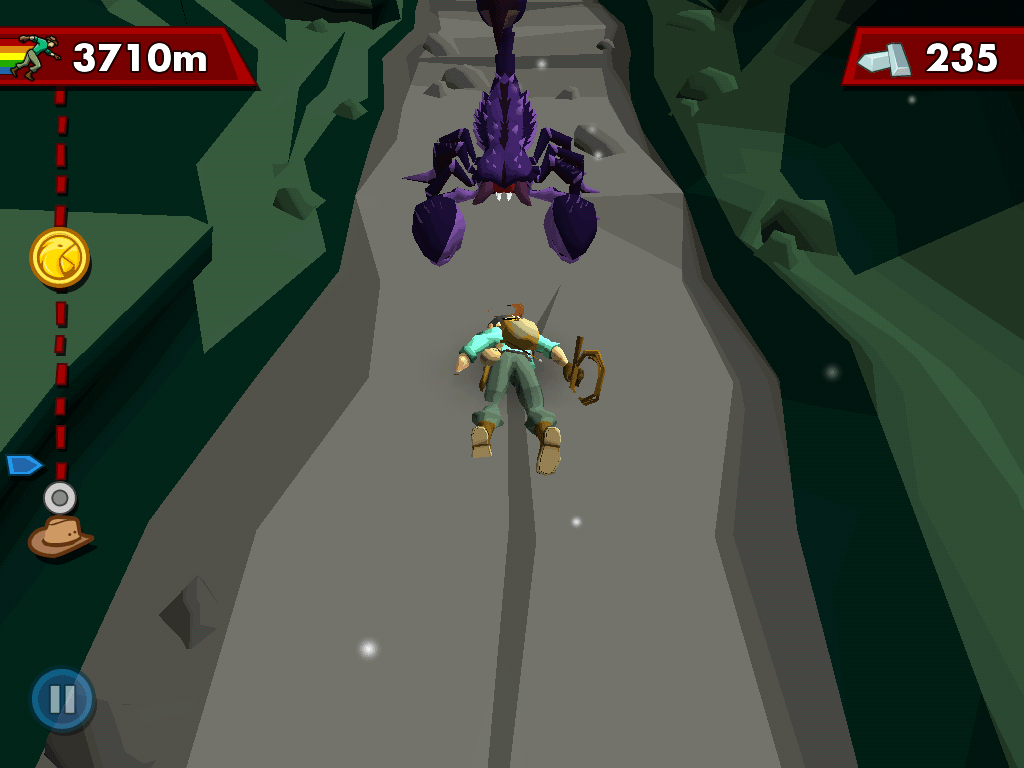