Random Runners is a universal app for iOS 5.0 and later.

Wow, Ravenous Games has fallen hard. What happened to 2D quality games that were fun? Random Runners is a mix between a Platformer, an endless runner and a shooter. That sounds great, but unfortunately Random Runners is hobbled by too many problems to redeemed without a few major patches. Oh and it crashes. Avoid Random Runners. 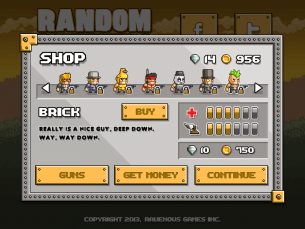 Bad Level Design & Cheap Enemy Placement: Levels are designed to punish you. Skill doesn’t matter here; it’s more about luck and endurance. You will often find gaps that are just about impossible to jump across. After replaying several levels, getting by unscathed seemed more of a matter of luck than skill.  That’s not fun.

On almost every incline you will deal with a wheel coming at you. You can’t destroy this wheel, you can only hope to dodge. For the life of me I swear there is no getting the timing down on those things. You will just find yourself holding your breath and hoping each time you jump over one of those things. That’s not fun.

Often you will find groups of enemies in your way. For example: Two enemies and a mine. Well your puny weapon can only kill one of these things and you can’t jump them so you just need to take the hit. Other times enemies are placed right where you land, leading to more cheap damage. The worst offenders are the moving aerial mines.  Sure you can shoot one of those if you are lucky, but most of the time you are getting hit. That’s not fun.

Under-powered Weapons with confusing stats: Buying weapons is weird. The icons aren’t very clear on what is strong and what isn’t. I found shooting enemies with the starter pistol almost a waste of time. Some enemies would just end up dying right next to me.  I upgraded to the  Spaz shotgun and two shots would take them out, but it was utterly useless for multiple enemies. I then “upgraded” to the OP9X and it seemed as weak as the starter pistol. Common sense would say that the more I would pay for a weapon the better it should be. After getting the OP9X I pretty much gave up on common sense being a part of the game. The Spaz has the highest bullet marks which I think means damage. It has more than even the most expensive guns in the game. How is the shotgun stronger than the rocket launcher? Is there even a point in spending more gold and gems upgrading? Did anyone even test these weapons out? Honestly, I don’t think the answer to the previous two questions is a yes. So if there is no real logic in buying weapons that can handle the enemies, what’s the point? 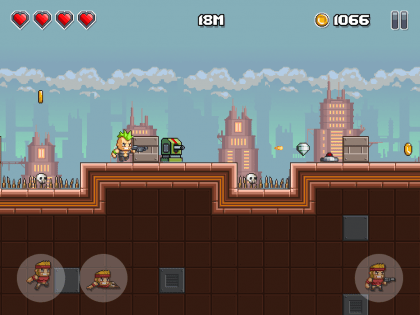 Heroes that aren’t worth buying: Unfortunately, the heroes also all suffer from bad stats. In the other Random Heroes games, heroes were unique. Each would bring unique buffs or skills that made them worth getting or playing through just for fun. In Random Runners we are stuck with heroes whose stats are the same. There’s no real reason to spend the max amount of money on the most expensive characters since the much cheaper ones offer the same stats and still suck at jumping. I’d gladly save up money to buy a character that can actually jump better but none really do. It seems the only difference between heroes is their health pool and movement speed. Considering you need both to be as high as possible Brick seems like the best value here if you want to beat this frustrating game. The rest of the characters just seem like filler options to make it seem like we have a large selection of characters when we really don’t. You are going to start off with your default hero and hate life. Then you are going to get Brick and still hate it, just slightly less. There is no reason to buy any other character if you are doing regular mode or endless.

Crashes: Get used to random crashes when playing the game. This totally destroys endless mode because you lose any gold or gems you earned.  The menu also freezes up and stats lag when choosing different heroes and weapons. How was this released this way?

It seems levels were designed to make you die, skill or no skill.  That’s not fun. Of course you can use gems to progress where you left off. If you happen run out of gems you can always buy more with real money if you are too lazy to farm them.  The more I play this game, the more I feel the bad design was intentional to get people to buy gems.  Why?  I dunno, but that’s not fun.

I am totally hating Random Runners for the iOS. Get Don’t Run with a Plasma Sword instead.  Way better in every way.

How to farm gems in Random Runners Fast! 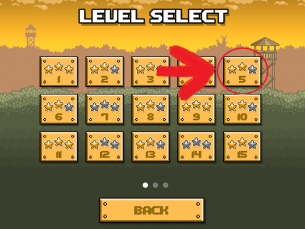 Fairly quickly into level five you will run into a gem. Get it, die, rinse repeat for a few minutes and you will quickly have enough to buy all the useless weapons and continues you want.