Don’t expect a good view when trying to run.

Runbot is a universal app.  With its great graphics, bad camera angles and tiny mines, I suggest if you do want to try this train wreck only do so on an iPad. 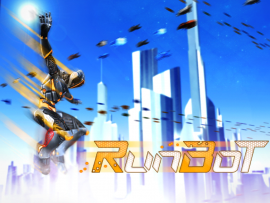 Runbot is a Freemium endless running game that tries a few new tricks to make itself stand out from the crowd. Sadly, none of these tricks actually work and end up hurting the game. The biggest problem is the shaky cam that will be pure torture to those who hate shaky cam. How bad is it? I’ve gotten four migraines and two headaches playing RunBot. RunBot’s camera system is that bad. Runbot also suffers from poor controls that, combined with obstacles blocking your line of sight, lead to many, many unfair deaths.

Honestly, I can’t think of a single reason I would recommend RunBot. The migraines and bad overall gameplay experience make me want to shout out to the world:

DON’T DOWNLOAD THIS GAME!!!  RUNBOT IS NOT WORTH IT!

The first and biggest problem with RunBot is the camera. For some reason Marvelous Games thought a 3D endless runner with plenty of obstacles and hazards could use a side 3/4 view with shaky cam. Once again this was a bad idea. RunBot gives me migraines!

To make matters worse the swipe controls are hit or miss which unfortunately doesn’t work too well when you need to avoid obstacles. For bonus fail, RunBot has an energy system in place that will sound and annoying siren to let you know you are running out of energy. Even when you are running into bottles and bottles of energy it never seems to be enough to shut off the insanely annoying alarm. It also wouldn’t be fair not to mention the annoying upgrade system and the game’s use of In-App Purchases….

Avoid RunBot. Besides the nice graphics there isn’t anything worth your time here even if RunBot is free.