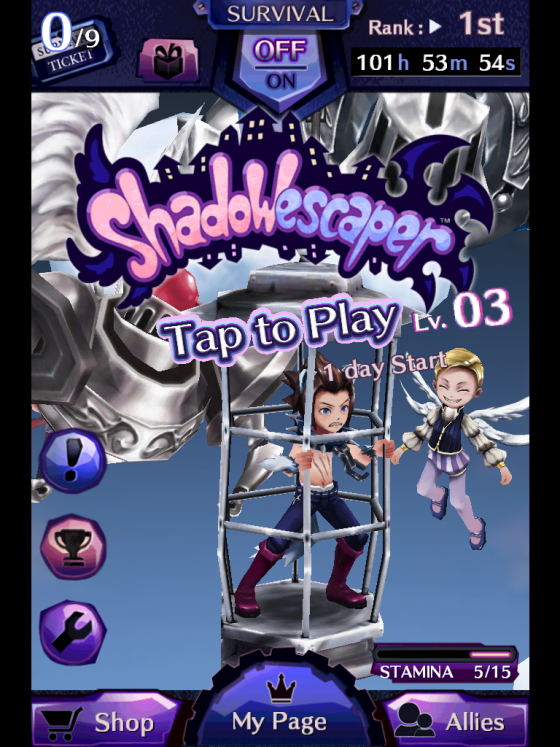 Get ready for repetitive boring gameplay!

Shadow Escaper is a universal app.  iPhone 4S, iPod touch 5th gen, and iPad2 or later is recommended by the developer. This played horribly on my iPad 2 so I guess later is better. 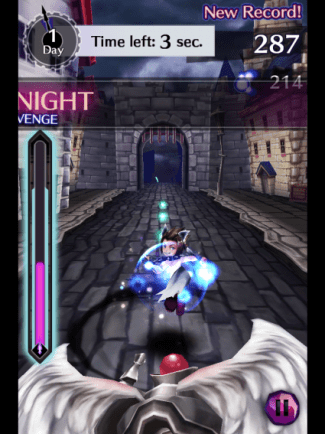 Shadow Escaper is another running game for the iOS.  It isn’t very good, but it’s interesting enough that I’m hopeful some smart patching fixes its many flaws.  It keeps your attention for a little while, but this is a Freemium app that  isn’t worth it even if it’s free.

Shadow Escaper doesn’t give you  the ability to progress your character as much as other runners.  The main mode ” Shadow Escaper ” is a running game that is a race against the clock.  You have to last until the day is over which doesn’t take very long at all.  Unfortunately that seems to always happen right when I get into the level.  It’s actually really annoying to be in a good running game groove and then have to stop, and do an insanely simple tap the screen game. It’s too bad that you get the same screen and effect over and over again. It makes this portion of the game more of a hassle even if you only have to tap once. The goal here is to last as many days as possible and rank up on the leader boards, which is very poorly implemented. Unless you log into Facebook or Twitter you are just a random long number and no one else’s scores show up.  Unfortunately, the main game is just so boring and repetitive that honestly I just don’t care.   I mean that even without considering the really bad tilt controls, bad jump response and weird in app purchasing system in place…With all of that, this game is a pretty disaster with nice music.

There is a survival “endless” mode, that is so so.  Unfortunately the developer got really greedy here and requires that you have tickets to play this..but you can’t buy the tickets with in game currency.  Nope, you need to spend real money to buy more tickets, which is just stupid and greedy. So once you run your initial nine tickets, you just can’t play Shadow Survivor anymore unless you buy more tickets. Forever.  There isn’t even a one-time unlocking forever purchase available.  The developer seriously thinks people are going to shell out money forever for this mess.

How does it play and why it fails: 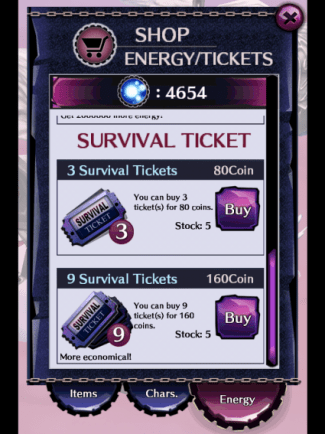 So I have to keep paying to play survival mode?

The biggest problem for the main game Shadow Escaper is its day to night mechanic.  It just doesn’t work and interrupts gameplay without giving you the feeling of accomplishment. The button timed scene that always follows is just annoying after the third day and insanely frustrating after dying because of cheap deaths.  I don’t care about hitting that circle.  The points don’t matter and the animation never seems to change. What am I accomplishing here?  If there was a plot that happened after every “day” that would be one thing.  I’d care about running longer. I’d look forward to the end of the day.  I would be invested.  Unfortunately, I’m not invested in this at all.  It’s boring, repetitive and filled with too many problems that it’s a waste of my time.

Shadow Survivor suffers from all of the problems the main game has except the day and night mechanic.  Instead we are introduced to the pay to play system that are tickets.  Like I said above, you can’t buy more tickets with in game currency, just real money.  This insane money grab idea is so bad that I just can’t believe it was released this way.  Did they think people would actually pay into this?  Are there people who actually would?  At least offer me the option to buy unlimited plays for a small fee.  I’m not going to continually rent repetitive broken gameplay.

Shadow Escaper & Shadow Survivor has more problems, like a forced Facebook connection after games, choppy sound and more, but I can only write so much bad about a game before I feel like I’m being mean.  Just don’t waste your time with this.

It’s designed from top to bottom to be a Freemium game.  If you want a good running game there are tons of better options out there.  Avoid this.