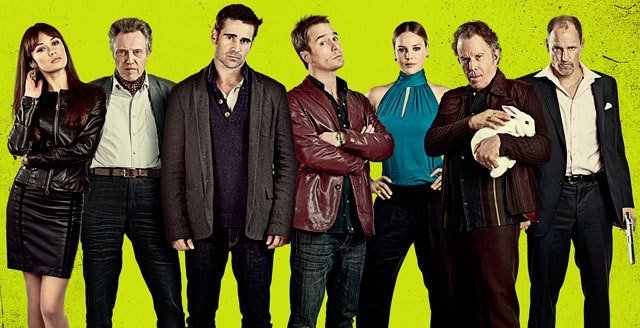 Yes. Seven Psychopaths is definitely worth a rental.

While not completely action-oriented, the scenery and the crazy action sequences there are deserve Blu-Ray.

Seven Psychopaths is a fun and funny movie. If you’re not into dark humor, you most likely won’t enjoy this movie. If you don’t mind a little violence and can laugh at the craziness of the, well, crazies, then you will love Seven Psychopaths. Everyone delivers here and it’s an all star cast. You can’t really go wrong with Colin Farrel, Sam Rockwell, Woody Harrelson and Christopher Walken.

While it is an star studded cast, Sam Rockwell really steals the show in every scene. He’s just this fast-talking and hilarious sidekick to the boozy Colin Farrell. He has a ton of great lines, though my favorite is when he is addressing Farrell’s drinking problem stating, “You’re Irish and you’re a writer! You’re F—ed.” The movie makes it clear that Farrell’s character is an alcoholic. Pretty much every scene in the movie he is drinking some sort of boozy beverage. Is it a ridiculous movie? Yes. But it’s ridiculous in a great way. Despite the fact that these psychopaths are murderers, you can’t help but relate to all of them. The movie does a good job humanizing these seemingly cold-blooded murderers. Besides that, there are some flat out HILARIOUS scenes. I won’t give any away, but suffice to say Christopher Walken brings some comedy gold to the screen.

Not much. There’s not in the way of bonus features for Seven Psychopaths, which is a bit of a letdown. I would have loved to see some deleted scenes and more interviews with the cast.