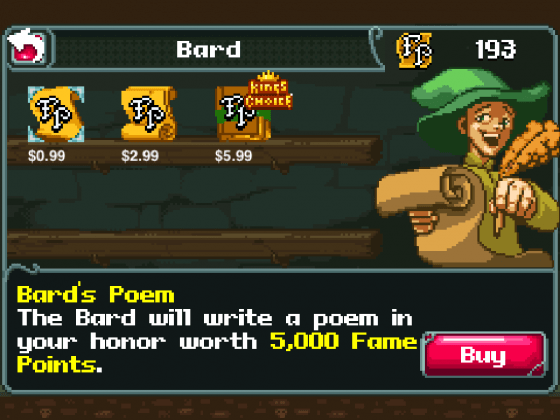 Slayin is a universal app for iOS 4.3 or later.  As always I prefer gaming on my iPad 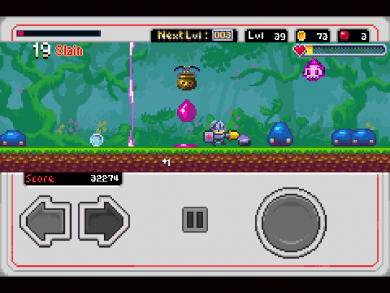 Slayin is touting itself as the world’s first endless RPG. Well it’s not and there really isn’t anything RPG about this game. It’s more of more like a boring, dumbed down Spell Sword that only gives you one life for some insanely stupid reason. The design doesn’t really make sense.  By level three you are going to be mobbed by enemies. Skill doesn’t have anything to do with surviving here, just luck. To make matters worse, characters are locked behind a currency wall that you need to grind like crazy to get through. The same is unfortunately true for the other modes.  By my first character unlock I was pretty much done with the game.  I only kept playing so I could write this review.

As is now, Slayin feels like a Freemium game that has the nerve to charge .99 cents then nickel and dime you by locking content behind  pay walls. Sadly, even if the other characters and modes were unlocked off the bat this still wouldn’t have been worth the .99 cent asking price. The game is too shallow to recommend the purchase.  Wait until this goes Freemium or there is a significant content patch.

If you are looking for a really great one life Endless RPG experience I wholeheartedly recommend bit Dungeon.  If you want an insanely fun button masher where you actually get a feeling of character progression while using 2D gaming skill get Spell Sword. 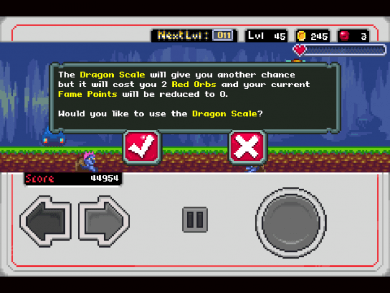 Why screw us out of currency you already make too hard to get?

Not very well.  The controls for Slaying are pretty simple but I’ve noticed times when my button taps weren’t registering.  The gameplay ratchets up in difficulty really fast and there is no real strategy to the game.  Since you are limited with only one attack you don’t really have to think much here. The game decides the cheapness of the enemy onslaught. Will you earn enough gold to survive and get gear upgrades?  Unfortunately, it’s all out of your hands.

Leveling is a joke here, doing nothing at all for you. It’s more like a countdown indicator of when the next boss is coming. Every level requires a set number of kills, every ten levels you fight a boss. That’s it.

The game levels themselves don’t change for some reason, only the backgrounds and some of the enemies. The only interesting part about playing the game is the bosses. They actually require some skill and memorization. Unfortunately, the bosses fight with some pattern randomization, which would be interesting if they weren’t gated by the mobs and mobs you have to endure to actually reach them. Sadly, defeating said bosses does nothing for you. They don’t heal you, or give you any loot or even decent gold.

The character design is great and the enemies look good too. The music is also fun. 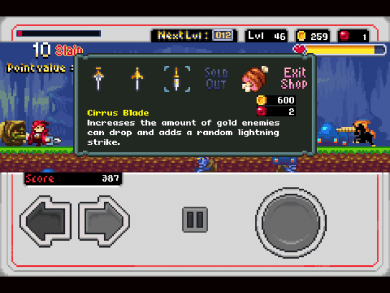 Where do you expect me to get all that gold?

The level design gets old fast. FDG Entertainment should have taken a page from the much better Spell Sword and made different levels for Slayin. Having actual platforms and gameplay environments would have made this game fun. That way there would have been a feeling of real progression and fighting the endless mobs would have required actual strategy instead of the button mashing luck fest that it is now.

Enemies aren’t really challenging here, just cheap. You will fight hordes of them, which sounds fun, but they are combined in a way that often makes it damn near impossible to use any skill. You just need to plow through everything and hope. Hope that they don’t use some insane combinations on you and hope coins drop so you can survive.  Coins do heal your character a tiny bit, but they are designed to fly up in the air, drop down and then disappear very fast.  This makes the game a lot more frustrating than fun.

The pricing of the Goblin store is beyond stupid, it’s just broken. Everything is insanely overpriced. Then for some reason there is no explanation of new year’s benefits or differences. So  you are stuck with three daggers in the store with the exact explanation of what they offer.  The only idea of what might be an upgrade is the price you have to pay, but since every non-boss monster in game dies after one hit what really is the difference here?  The Knight at least gets some different sword lengths, but you really can’t tell in the store what is longer than what.  It would be interesting for the Knave if there were different daggers that actually did different area attacks. For example, maybe leaving one side open to cover the top making jumping safer. To make matters worse the food price keeps getting more expensive the more you use it.  It makes no sense to penalize players for using the health in game.

Paying for the continue option is the last slap in the face I put up with before I deleted this mess.  Why, should I lose all of my fame points for continuing?  Seriously!  I just spent the better part of an hour farming so that I could get the ability to continue in this never ending, slightly changing mess of a game and then if I want to use the continue I have to lose all the currency I earned so far?  Why?  FDG Entertainment you already made getting in game currency annoyingly hard to get, why screw us even harder?  I paid for this game.  It would be one thing if it was Freemium, but this isn’t.