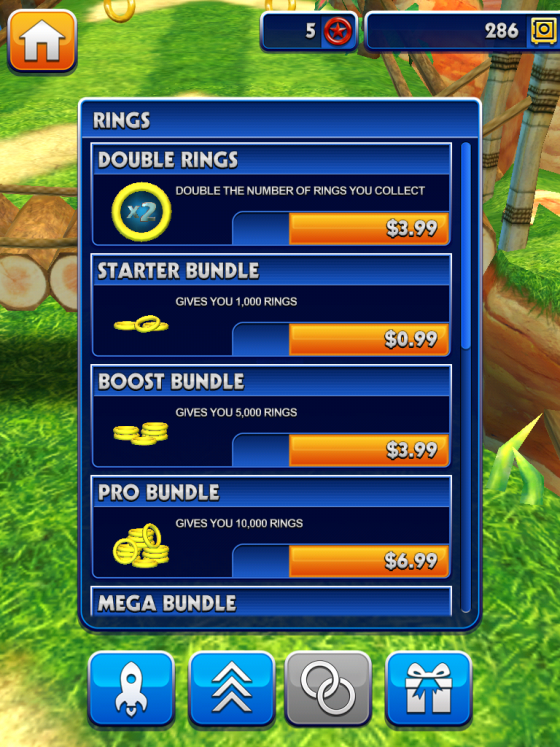 Sonic Dash is a universal app for iOS 5.0 or later.  I haven’t had any issues playing this on my iPad 2, but it seems there are some issues with device compatibility on the review portion of the app store.  There is a lot that goes on here so as usual I recommend playing on the bigger screen of the iPad.

I hate this game. Sonic Dash has so much promise, such great graphics, and such good music it kills me to have to say the rest of the “game” sucks.  It’s broken.  I hope to god Sega fixes it, but I doubt it.  Sonic Dash is a Freemium game.  The bad kind.  But to make matters worse it actually had the gall to charge you for a game that in all respects should have been free. As a nice slap in the face to all the early adopters who paid for this mess it went free and claimed that the new update fixed all the issues. It didn’t.

Get ready to die of a lot of cheap deaths thanks to a horrible camera system, wonky controls, and traps hidden directly behind objects you have to jump over.  Seeing as the game is randomized, you can’t even try and memorize these fail jumps. Best of all be ready to be spammed after ever single death about getting in app purchases. Oh, and those other characters that the game mentions?  Yea those are behind a wall of currency that is almost impossible to get in game.  But you are constantly reminded you can buy it.

How it plays and why it fails. 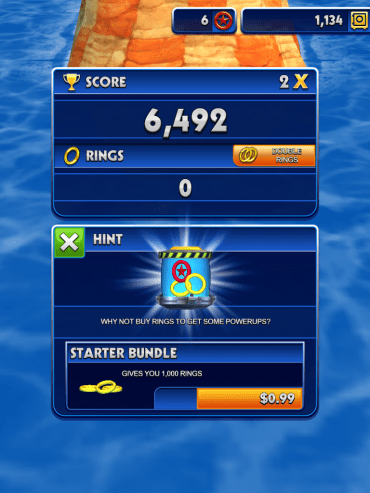 The controls for Sonic dash are wonky.  You have to swipe left and right to move that way.  But if you accidentally swipe slightly up , sort of how you would with a human thumb while playing the game with one hand, you find yourself accidentally jumping up and left or right.  It gets you killed. A lot.

Next and one of the biggest stupid choices Sega made with Sonic Dash is to have Sonic’s Charge up dash meter on the bottom right of the screen.  So again if you are playing this and happen to be right handed, you end up blocking the meter.  I have no idea why someone would think to put a meter you are supposed to be able to quickly glance at the bottom of the screen where it would most likely be covered by the controlling hand.  At least the Temple run game’s and pretty much every game that cloned them understood that the best place to put it is at the top the screen.  Next to where you should be look at anyway.  How the heck did this pass quality control?  Seriously?

The next fail is the roll attack not registering when you attack and enemy.  The hit detection works sometimes and not others.  Leading to more cheap deaths.

The biggest problem in Sonic Dash is the camera. Whichever idiot decided it should move around when you hit a curve or slide needs to be fired.  Thanks to the camera movement, traps are often hidden until it’s too late.  It’s bad enough that some traps are just directly hidden behind jumps, but having hazards kill you because the camera is stupid is beyond infuriating, it’s game breaking.

Don’t support this game with your money.  This isn’t even a half decent endless runner, it’s a broken endless runner that shouldn’t have been released. Worst of all they put this train wreck under the banner of Sonic.

Why didn’t Sega just port Sonic and the Secret Rings? 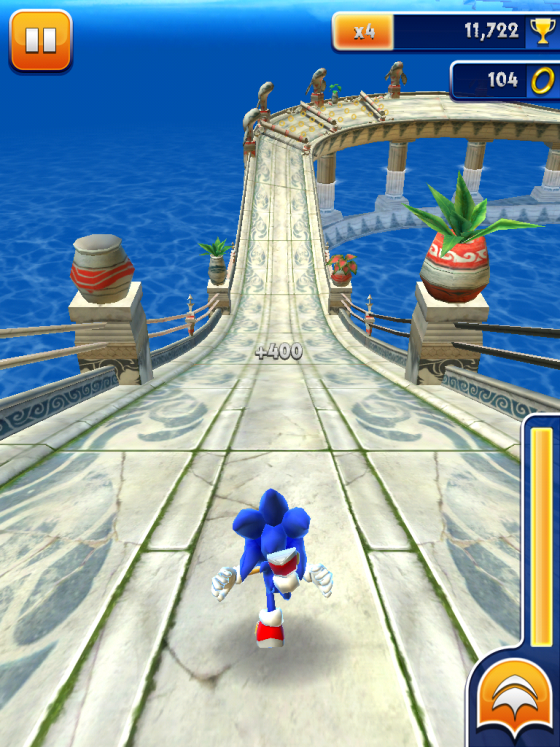 At least it looks nice.