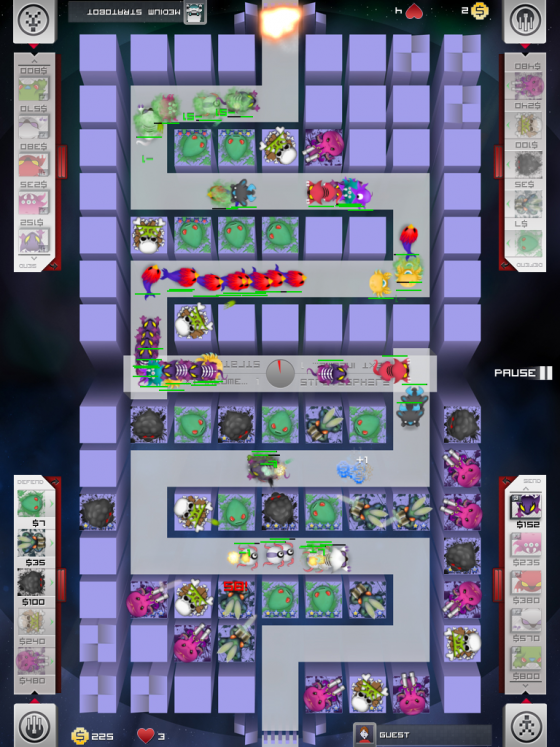 Stratosphere: Multiplayer Defense is iPad only iOS 5.1 or later.  Honestly I can’t imagine wanting to play this on a smaller screen.

If you are a fan of Tower Defense games JUST BUY THIS. 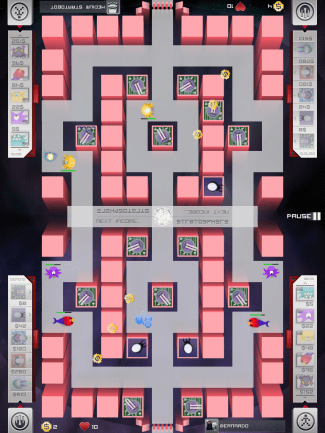 Stratosphere: Multiplayer Defense  is a really fun Tower Defense game that manages to breathe fresh life into a genre that seems like it can’t do anything fun and new.  Stratosphere has a good amount of variety in level design and ingenious game modifiers that ensure this app won’t be collecting digital dust anytime soon.  The best part is in the title, Multiplayer!  Not just multiplayer, but  multiplayer on the same iPad, at the same time!  I seriously love tower defense games, and I love playing games with my fiancée.  Up until now those were always two separate worlds. Now with Stratosphere: Multiplayer Defense we seriously have been playing together and loving it. If you want a new tower defense game in your life, you need to buy this.  If you want a game you can have a lot of fun with friends who are with you, you need to buy this.  If you want to introduce someone to tower defense games, gift them this. With Pixile Studios promising more content, I really can’t ever imagine myself deleting this off my  iPad.

Perfectly.  Just perfectly.  No lag, great music, art, level design, and perfectly balanced gameplay.  I seriously am shocked how polished this game is.  I love that I can just spend a few hours on this alone, figuring out new build orders and testing myself and my strategy out against an adjustable AI that mixes things up.  I don’t find myself feeling like I’m replaying the same levels, when I am technically replaying the same levels.  Then I love being able to pop this game right between Jasmine and I and she can still put up a great fight and kick my butt sometimes.  You don’t really need to know how to play tower defense games to enjoy this.  With a really good tutorial attached, this is the perfect way to introduce someone to the TD genre.

The developer cares.  Stratosphere: Multiplayer Defense is pretty much flawless. Everything feels like it was tested and retested countless times before it showed up in the app store.

The three races to choose from seem, for the most part, pretty balanced since they only affect the defensive capabilities, it doesnt make the game too complicated.

The $tash is a really great idea.  Rather than having every level, modifier and perk available off the bat they are gated by an in-game store. The $tash uses in game currency and really makes everything you buy feel like you earned it.  The coming soon sign is just a very good touch.  It just lets you know Pixile Studios isn’t finished yet.    I am really hoping for a lot of content updates! 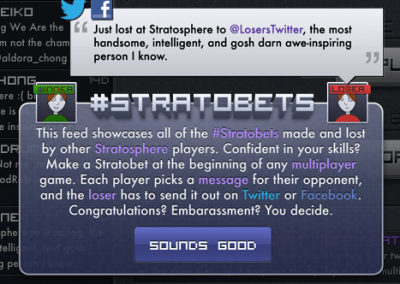 Stratobets are another great feature.  If you and your friend are both logged in with your Twitter or Facebook accounts you can  use this feature.  The loser sends out a tweet or post saying they lost to the winner in a humorous way. Nice touch.

Modifiers: Spice up your game with interesting rules you can unlock and use in game.  Cool things like: Play with only one life to lose, A top hat for your cat minions, Speed rounds, Revival modes, and much more.  Hopefully much, much more to come.

For some reason I can’t save my Facebook profile information in the app.  Also, it doesn’t save my win loss history when I do log in via FB.  Maybe it’s because I don’t allow the app any permissions at all.  This isn’t a deal breaker because you don’t need to even have a profile attached to unlock everything in the $ash.  I found that everything I unlocked logged in can be used when I wasn’t logged in. If you want to save your win history you can just create a normal profile and you are set.

If you are looking for online play it isn’t here.  I don’t know if this feature is coming in a future update, but if it does it will be a welcome addition that should fit seamlessly.  The lack of online multiplayer isn’t a deal breaker for me at all, but I have noticed some reviewers lamenting this.  Personally, I’m totally happy with iPad only multiplayer since it’s what I’ve been wishing for.