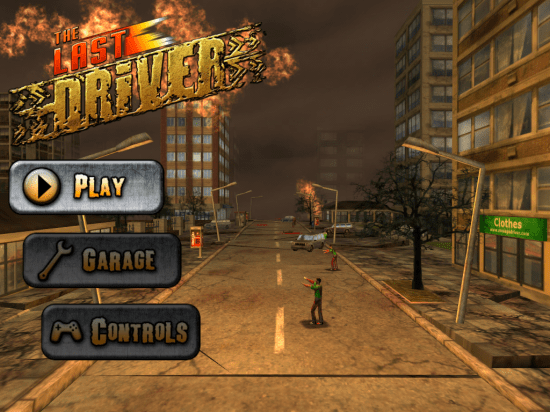 The iPad. With all the stuff going happening on screen you need the bigger screen to stand a chance at surviving The Last Driver.

The Last Driver is a semi randomized endless driving game that also has shooter elements and platforming.  Think of a mish mash between Zombie Highway, some mindless shooter, and a game that sacrifices quality for a cash grab.  For the environment mix up the end of the world, alien invasion, random dinosaurs, giant robots and a zombie invasion and you have the formula for a really great game.  Sadly the execution just doesn’t work. 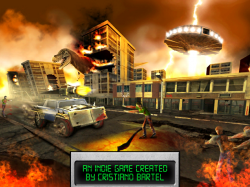 Why cant it be as awsome as it looks?

Gameplay for The Last Driver is centered around store upgrades. It sucks until you can afford to make it not suck….so badly.  Either by grinding endlessly to make the game bearable or just out of sheer frustration paying for upgrades.   You start off driving a boat of a car in a game that demands tight controls.  You are given very limited ammo and jumping in a game where so many enemies rush at you so often you wonder why ammo just isn’t free.  You stick with it and get just enough coins for more ammo, and better controls and you can survive a bit longer to see more crazy stuff.  Sadly at the end of the grind it’s still not worth it.  Thankfully I never spent a dime in the store.  I just wasted my time, not money.  I’ve gotten pretty far in this game and it’s not worth all of the work.  If you want to buy a better car get you credit card out.  The better cars cost so many coins it’s easier to charge it than to earn it. 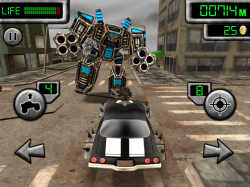 Very badly. There is the option for tilt control but it’s so much worse that I  just I ignore it’s there.   The default controls just aren’t responsive enough for the extremely narrow road you have to drive on.  There are times when I tap the shoot button and it double or triple shoots for no reason.  The jumping element while necessary just feels kind of tacked on.  The biggest problem with it are the many, many cheap deaths.  Cars drive out in front of you and just stop.  Some enemies are just unavoidable unless you have bullets.  Tornados will throw cars right at you.  This game isn’t about skill, it’s about upgrades.  It could be so much fun but it isn’t.  Because it costs about ten thousand coins to get the car to drive right.

The Last Driver is free but it isn’t worth it.  Had Chillingo just made a game with great driving, free ammo and jumping this would have been epic. Please make a sequel to this game that takes all of the great parts and leaves the store out of the equation.  I’ll try the free demo of that, love it and pay $3-4 bucks for that game.  Unfortunately as is, it’s just a mess that doesn’t work on too many levels for me to recommend to anyone. 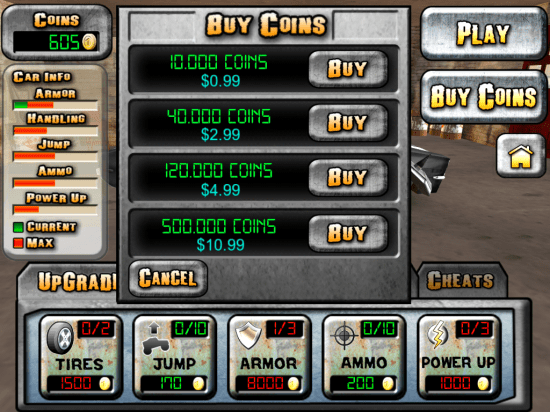