The Lord of the Roads Review 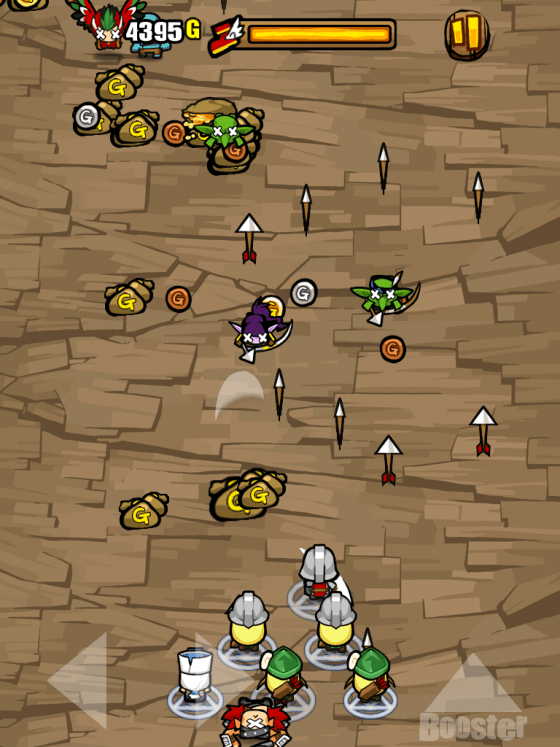 The Lord of the Roads is a universal app for iOS 3.1 or later. Honestly, I can’t imagine wanting to play this on a smaller screen than an iPad.

A shoot em up, a RPG, and an endless runner had a baby app and this is it.  Does it work?  Oh my god yes!

The Lord of the Roads is an amazing mix of all the above games with the addictiveness of each. Shooting action, bullet hell, level grinding, random encounters, and the awesome feeling of making it just a bit farther can all be found here. Really cute simple graphics and great music help make this a great download that I have no problems recommending at all. 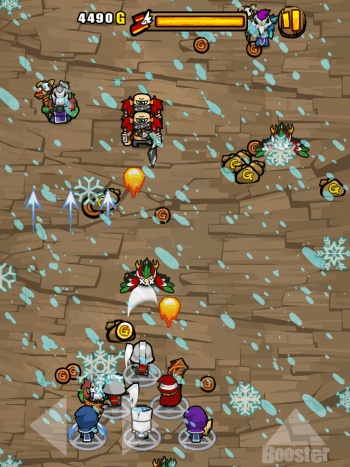 Thankfully, I haven’t experienced any lag at all.  The biggest problem with the music is that it’s stuck in my head all day. I’m not kidding. The controls are, for the most part, great. I’d love the ability to upgrade my party’s ability to move faster left and right to dodge things. Also, I think the game could use the ability to move the  directional buttons a bit.  They are a bit too far in the middle for me. It takes a few minutes to get used to it when I play and sometimes I find I lose the buttons. I tried the tilt control system, but I found it nowhere near responsive enough. Overall the game works great. JUST BUY IT!

The graphics are really cute, and the music is really catchy.  This is a mish-mash of games done right. Well a little too right. I find it totally addictive.  Since it’s randomized you don’t play the same game twice, so sometimes you find yourself with a great team and unit set up. Other times you find yourself armed with all of the wrong units to deal with the monsters at hand.  The latter situation can be very frustrating at first, but if you’re persistent and lady luck is on your side, sometimes you can survive long enough to take down those pesky bosses and hordes of monsters for a good while. There have been quite a few runs where I thought I was doomed only to find myself racking up huge amounts of gold. 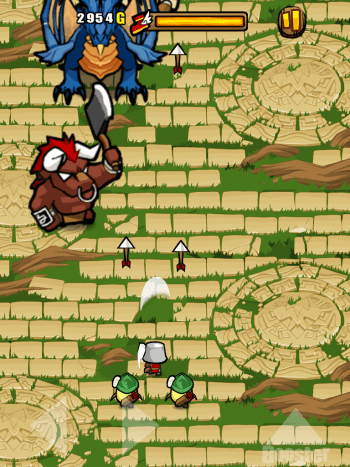 So far the in app purchases aren’t required at all, just the love of the game to grind out what you need.  Things have gotten a bit pricy, but as often as I play I have no problems making the gold to make my units stronger. The Lord of the Roads really does take the best of every genre and makes a strong unique game that just begs to be played and replayed.  I find myself just as addicted to this as I am to the Temple Run games and Sela. Great Job Magic Cube!

Challenge Mode is a fun add-on to the game.  Every three hours you have the chance to take down big bosses and a slew of monsters right off the bat for big gold rewards.  But it’s no easy task.  Out of the couple of dozen times I’ve found myself there I have only beaten the Challenge once.   I’m going to say right now that huge blue dragon can be downright cheap!  I’ve killed em, but wow… T’was a battle.

Even with all of the issues I have, I have to say the game is just insanely addictive.  The problems I have with The Lords of the Roads do end up being part of the challenge and charm of it.  At first dealing with these can be very frustrating, but the more you play the more you find yourself adapting to the limitations of the game and trying your damndest to make things work.  Sooner or later you are just going to be overwhelmed and die.  That’s the nature of the beast.  But you do find yourself lasting longer and longer and getting more and more enjoyment out of it.

I hate fighting a boss when the environment changes to snowy rain and I move slower. It’s a bad set up for cheap deaths especially when you find yourself with four bosses at once. Challenge mode wait time needs to be halved.  It’s almost impossible to beat as is, but waiting three hours makes the sting of defeat hurt that much more.

When you have a full party moving from side to side it is just too darned slow.

Enemy projectiles need to stand out more, especially when the snow comes.  The Harpies feather attacks get lost way too easily.  And enemy arrows curving at you is just frustratingly cheap. At times my attacks can nullify enemy attacks and others they don’t.  I never understand when and why that happens.

Bosses only being weak to one particular attack isn’t very fun.  I’m looking right at you minotaur.

Without the ability to swap out units when a better member for the situation comes you find yourself either trying to skim a party member off in time or just frustrated.