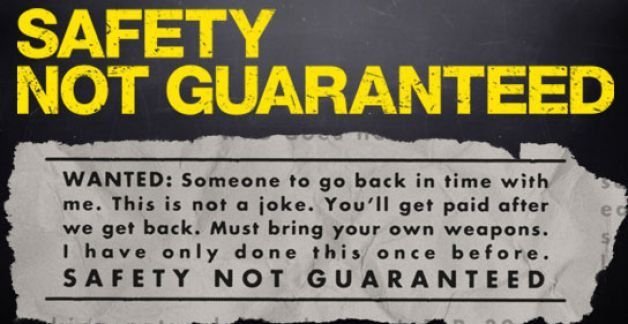 Yes. Safety Not Guaranteed is a sweet and fun movie.

You can enjoy it either on DVD or Blu-Ray. It’s more of a character-driven movie so you won’t miss anything if you don’t watch it in high definition.

Safety Not Guaranteed is a quirky, fun, sweet and ultimately satisfying movie. It might start off a bit slow, but about 15 minutes in, you become invested in all of the characters. At its core, the movie is a love story, but it also keeps you on the edge of your seat as the plot begins to unravel. It keeps you guessing until the very end.

The cast for Safety Not Guaranteed perfect. Aubrey Plaza plays the perfect embittered young woman struggling to find herself. Her chemistry with Mark Duplass is obvious from the first moment that they speak to each other. While she might think he’s crazy at first, his antics, way of speaking and overall personality eventually win her over. Safety Not Guaranteed isn’t just another cheesy rom-com. It does a great job showing that emotional connection between the two characters despite their misgivings. Plaza and Duplass’ character are both afraid to get too close due to their own past traumas. Eventually, though, they take that final step to trust one another. It’s touching and I couldn’t help but cheer for them. Of course, there’s also the added mystery of Duplass’ character, whether he is actually crazy or not. Did he actually invent a time machine? Is he actually being followed by agents like he believes? Or is it all in his mind. You’re kept on the edge of your seat. I like the mixture of the tension, comedy and the tenderness. There was also an excellent side story with Jake Johnson who plays the jaded reporter that takes Plaza and another intern, played by Karan Soni, to investigate Duplass. Johnson does a great job of playing a relatable jerk. You even feel a bit sorry for him towards the end because he is also trying to go back in time and mend his mistakes in his own way.

Nothing. I loved it.

Watch Safety Not Guaranteed. I’m not a die-hard romantic, but even this movie gave me that warm, fuzzy feeling.

Read our other movie reviews here.