Is The Quest Keeper worth your time?

No. Not right now.

What should I play The Quest Keeper on?

I’d stick to large phone screens and tablets for this. If it’s a pain seeing hazards on an iPad, I can’t fathom trying to play this on a smaller screen. 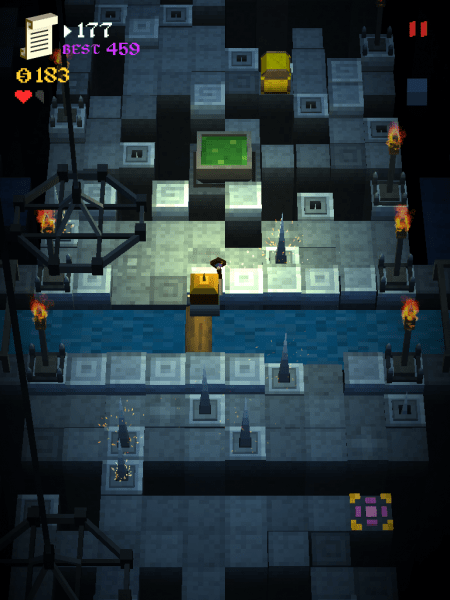 What did we think?

It has potential, but right now it’s an un-fun ad watching game where you die cheap deaths in between ads.

The Quest Keeper is a genius idea, it’s sort a combination of an endless runner and dungeon crawler. It just fails in its execution. Thanks to the randomized environments you often deal with broken mechanics such as totally impassable areas. This can happen early on or 12 minutes into an epic/stress filled run. That’s game breaking.  The fact that it happens very often is heartbreaking. Check out the main picture above and the slide show below to see a few examples of me getting stuck during runs.  There’s something about The Quest Keeper that makes me want to love it. Sort of like a super beautiful date that has tons of obvious problems you find out before you even sit down at dinner. I want to like you, I really do The Quest Keeper, but your lag, your broken maps, your punishing ad filled gameplay are too much for me. The developer wrote on the app page bug fixes are coming soon, but for now it’s broken.

If you are going to try this game first look for the small cube on the top right area of the screen.  Tap that for an overhead view or the game is maddeningly unplayable.  What compelled the developer to start you off with the worst possible view angle is a mystery to me.

I’ve spent too much time playing The Quest Keeper mostly because I felt like there had to be something there to make it deserving of all the five star reviews on the app store. The idea is great, but hours later I find I haven’t made much progression though I have watched a lot of ads. An insane amount actually.

You see The Quest Keeper uses gold as your continue and as a way to increase your abilities. You get gold by opening chests, traveling distance and watching ads. Lots and lots of ads. You can also just buy gold, but come on.

When you die in The Quest Keeper you can pay a resurrection fee and try again. This increases the further you go making plenty of runs feel like you made no financial progress whatsoever. This is where the game really feels cheap. Thanks to a bad camera system and environmental items that obscure your view, you will fall into pits. A lot. You will also fall victim to a lot of trial and error traps that are often not obvious. So you will need to hit the resurrection button if you want to proceed. The nail in the coffin is when you find that the area you are stuck at is flat impossible to beat. Some levels have floors that fall down before you even get to them. So you get to watch angrily and helplessly as the one path to proceed disappears. It’s usally after the fifth commercial rescue ad that I give up. There are also cheap environmental hazards. Like the only path back from a save point disappearing after you got the save. Then of course you pay the rescue ad price for wanting a save. This leaves you wondering if going for the next save is worth it or not. Again, this rescue ad based gameplay totally destroys your ability to spend your gold to upgrade your character, unless you watch more ads for gold or buy it. I sat through a lot of ads to afford some gear that was situationally useful, only to be greeted by those game breaking problems I described above.

I have to say I only did all of this because I was writing this review and the positive app store reviews made this game seem way deeper than it is. I can honestly say The Quest Keeper was a total waste of time. There is a great idea here for an endless dungeon crawler. Sadly the developer here just hasn’t made it. Again the app store page says fixes are incoming, but I never believe that until it happens.

When you are on a roll traveling far and bypassing traps The Quest Keeper shines brightest. I love the concept. I love getting past an area with skill and luck.  I hope someone takes this idea and makes it more rewarding and less ad generating punishing.  As is, the game has a great idea, but a very very flawed exicution.  I can’t wait to see what the developer comes up with next.  I feel like there is plenty of room for rescue ads, progression and platforming.  The Quest Keeper was a great idea, just not a very good or fun game.