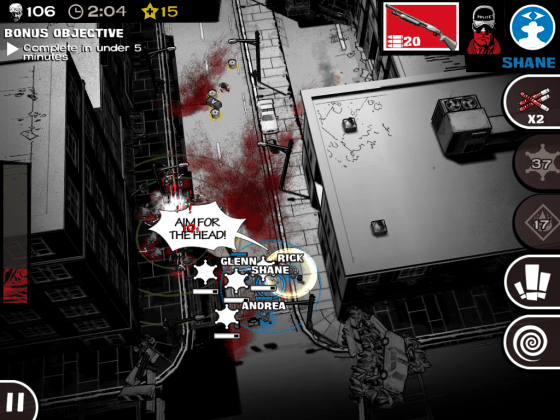 I would love to aim for the head.  If only you would let me see the Zombies.

Sort of.   Read the review and decide for yourself.

The iPad or iPad Mini.  This is a universal app, but the game deserves to be on a big screen. 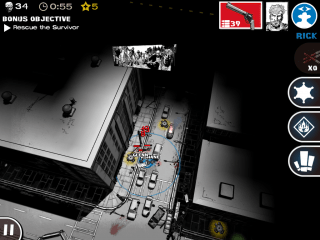 The Walking Dead: Assault is a fun squad based game with my favorite survival horror story as its setting.  Over all the two mix quite well.  There are multiple characters to choose from each brining his or her strengths and weaknesses to the group.  With several chapters to choose from and in game currency that is fairly easy to earn in game, you are going to find yourself going back often to earlier chapters to try out new teams and farm currency.  The game has in app purchases but I found with a bit of farming that I was able to avoid having to spend any more money besides the $2.99 buy in.

Sadly the game just uses the world of walking dead but there is no story here whatsoever.  If your here looking to relive the comic while killing stuff you are out of luck.

At first The Walking Dead: Assault looks pretty bare bones and undeserving of the $2.99 that I paid to own it. Then I used the multi touch controls to change the camera and my jaw dropped a little bit.  There was depth here.  Wonderful visual depth.  There are alleys that you can only see when you turn the world just so.  Supplies that can’t be seen unless you look for them.  Zooming in each character looks darned good to.

The real point of every level is to kill every zombie there.  Sometimes there are bonus objectives such as saving random survivors which  are nods to some characters in the comic.  Sadly you don’t really get much to reward you for doing these bonus objectives, that are so easy, you end up doing them anyway.  After you beat the game there isn’t much replay unfortunately.  They are promising more content, but we aren’t being told if its free content or if its paid.  And if so how much.

Perfectly. The characters respond to their tap commands and kill as they should.  I love that you need to have each character manually pick up their own ammo. The music and sound effects are also really nice to.  What really makes the world is the art, and thankfully for the most the graphics don’t disappoint.  On the normal level though there wasn’t a challenge at all until the last three levels.  Then I had to start thinking, but sadly not much.  Once you finish it there are two harder difficulties, but I don’t find them very satisfying. 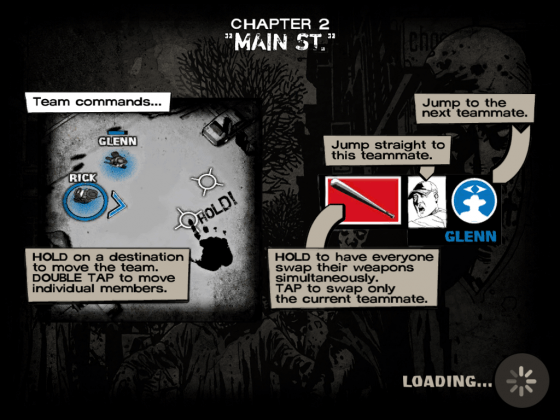 Hint: Never use the melee against the undead in this game. 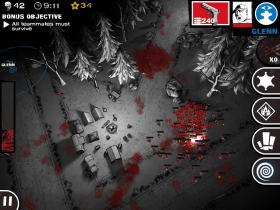 You can’t change or upgrade individual character weapons.  I get that this was done so that the game is “balanced” but unfortunately, long after you have beaten the game it doesn’t have much replay. I would love to give Glenn a shotgun since he is the fastest character in the game.  Lori would be more fun if she even had a basic hand gun.

The SFX comic sounds animations are cute at first, then grow very annoying fast.  I want to be able to see things clearly when I use special abilities and I just can’t because these cool downs and corresponding text on screen just block out a lot of the view surrounding the characters. There needs to be an option added to shut these off.

The characters suck at melee… As a fan of the comic this is pretty inexcusable. Rick can take out several roamers alone one with one hand.  Why is he struggling against one in game?

I get there needs to be a challenge here, but it should be the numbers of Walking Dead you fight, not some super roamers that take the entire squad emptying clips on to kill.  I would have rather encountered armored hostile survivors instead.  Or at least have some armored zombies (dead military maybe?) At least that would have made more sense. But the red ghost like zombie while, standing out and quite ominous, just doesn’t make sense for me.

The leader boards needs to differentiate between the folk who use the flares and those who don’t.

This game is best suited for the die hard fans of the series who just want a fix.  Unfortunately there really isn’t much reply value here.  The harder difficulty levels don’t have more zombies, just faster harder to kill, cheaper zombies.  That’s not really fun for me.  You can easily unlock achievements that give you the option to save some pictures to your iOS devices.  Unfortunately none of these are really “Omg I need that as my wallpaper” cool.  They just feel like they were thrown in.  The trivia is pretty lame.

They just updated the game and finally Michonne is unlocked but she costs 200 supply.  Really?  Before the most expensive person cost 20, wait no… They updated that to and now it’s 25.  Still not bad but wow.  Yes you can grind that 200 out in about an hour or you can just pay .99 cents for 200.  To me this is just kind of screwed up.  I already paid 2 buck for a game with very limited replay.  Am I going to be nickled and dimed for more stuff going forward? What’s next?  Adjusting the drops rates?  Why are the characters costing more supply now? 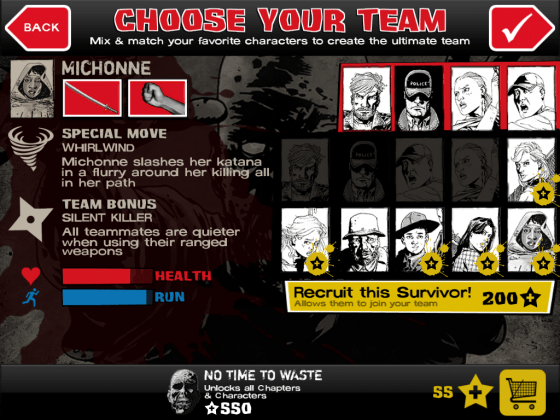