Is It Worth Your Time.

Not really. In the beginning the levels are fairly easy, but you eventually hit a pay wall.

Wizard & Dragon Defense is available for Android OS. You don’t really need a large screen for this game so you can get the same experience on a phone or tablet.

Wizard & Dragon Defense is pretty much like every other side-scrolling “tower defense” games. You have your main hero and your units that you can unleash after you have a set amount of mana. You then have to defeat a horde of enemies on the other side of the map. The gameplay is pretty easy to pick up and you get a couple special attacks for the main hero Aden, a Pyromancer with a dragon as a pet. You can level up your units and upgrade your hero’s special spells by spending gold that you earn in-game. The levels themselves are pretty short so it’s a good game to pick up and play when you’re on a train or waiting for a friend. 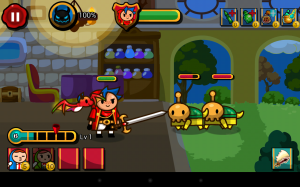 Going off to murder some cute undead…turtles?

The interface and gameplay is very smooth. If you’ve played other games like this, then you’ll definitely be able to figure out the basics of Wizard & Dragon Defense. There’s also a wide variety of different unit types, though unfortunately you can only equip four of them per level. I ended up using the same unit types throughout the game. You can mix it up if you wish, but you there’s really no need.

There’s a little bit of a story here. You play as Aden, a Pyromancer who is out to stop Gaping Maw from destroying the world. With the help of your dragon friend and companions you fight against a legion of adorable undead monsters.

The art is pretty basic, but it works. You don’t really need fancy graphics for a game as simplistic as this. The dialogue is fun/cheesy when you complete the levels so  you can get a nice little chuckle. 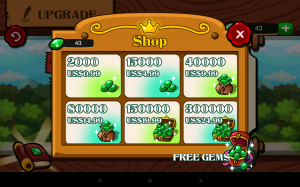 Just as you start getting into Wizard & Dragon Defense, you hit a paywall. At around level 30, the difficulty just ramps up to the point where you simply cannot progress any further. It sucks because all the levels before were ridiculously easy. So easy, in fact, that I never died. Then I get to level 30 and BAM, all of a sudden my hero and units are getting destroyed by the regular goons. This is where the in-app purchases come in. You’ll need money to upgrade your units and unfortunately you can’t actually go back to later levels to grind money. So you’ll need to get your butt kicked on the same levels for a small pittance in order to level up your units and hero enough to get past the level. This gets annoying, really fast. Sure, it’s a free app but come on. At least make the game increase in difficulty gradually instead of punishing the players like this. I didn’t make any in-app purchases, but based on some of the reviews I read, some people were having issues getting the gems after paying.

Aside from the obvious IAP fail, there’s also no depth to this story. It’s basic, but I’m not invested in the characters or the plot. It’s easy enough to put this game down and forget about it. Move along. There are better games out there.

Read our other app reviews.