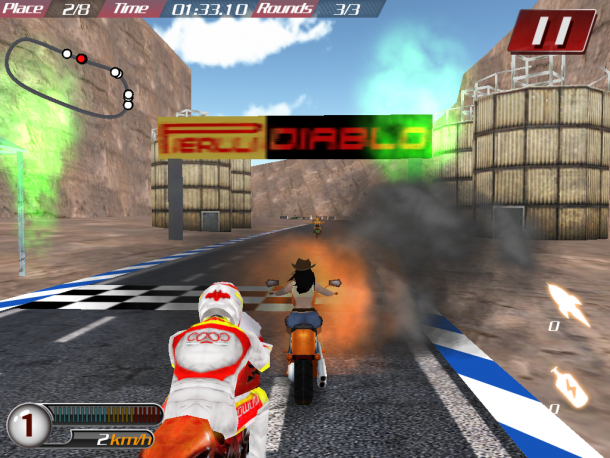 That’s me going from first to fail after catching a rocket to the back.

Is AE Moto GP worth your time?

AE Moto GP is a universal app for iOS 4.3 or later. I prefer it on the iPad.

If you want to win races here you are going to have to do so with real money. 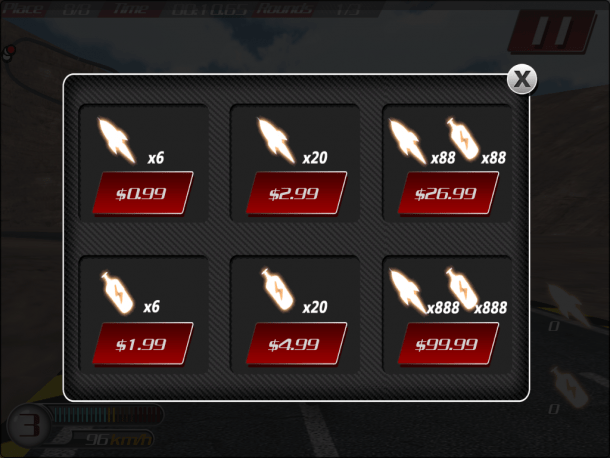 This is the only way to win and progress.

AE Moto GP is a freemium motorcycle racing game with slightly dated graphics but good controls. Unfortunately, for some strange reason AE Mobile decided to add rockets into the mix. This makes winning a race or even placing in the top three impossible as you will always get an unavoidable shot and fall behind the crowd of racers.  You will never be able to catch up again.

AE Moto GP isn’t about learning the track or skill it’s about using power ups. You only get five power ups when you start playing. Unfortunately, they don’t replenish as you collect them past each race. So let’s say I have 5 rockets when I start a race, use one and pick one up, my rocket count now reads 4+1. At the start of the next race I only have four rockets. Power ups don’t carry over! If you want more power ups you are going to have to pay for them.

That’s so insanely bad I cannot believe this game was released this way. You will run out of power ups and have no real way to win unless you pay…

Of course your fellow drivers don’t ever seem to run out of rockets. Ever.  So placing in a race totally depends on you using your also non-replenishing nitrous and pulling away from the pack at the very start of the race. Even when you do break way from the pack you are totally vulnerable to catching a rocket to your back. It seems like there really isn’t any way to win besides using about three or so boosts to make it the finish line hopefully unscathed.

AE Moto GP is just designed to be a broken experience unless you pay.