The Nardio Review of Around 40 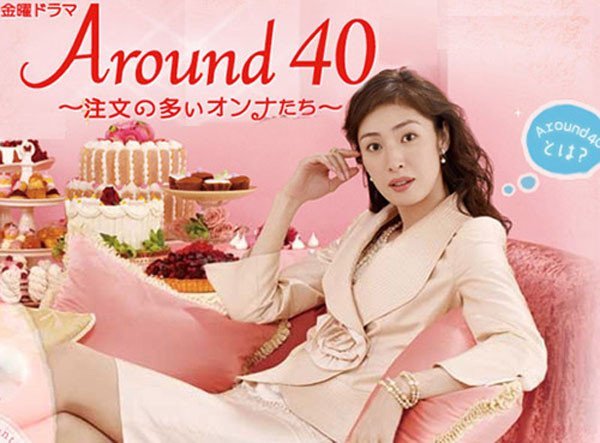 Is it Worth It?

Around 40 is only available on DVD.

What Did You Think Without Ruining it?

Around 40 is a fun, quirky and cute Japanese TV Comedy/Slice-of-Life. The main character is extremely likable and the supporting actors do a great job holding their own on screen. While not exactly a soap opera (not enough melodrama), there’s still plenty of drama, love issues and even some heart-wrenching moments mixed in with the humor. If you’re an emotional person, you might tear up at some parts. I just wish it was a little longer so that we could spend more time with these characters.

Around 40 is a very well done Japanese TV show. The main character Ogata Satoko, played by Amami Yuki, is incredibly complex and Amami really nails the character. The timbre of her voice changes from playful to professional without missing a beat. Not only that but she really understands the nuance of the character. Ogata is a very successful psychiatrist and is incredibly independent, however a part of her yearns for marriage and children. She is equal parts happy to be single and living the life she chose but also scared to live her life alone. This dichotomy could have been lost if a more inexperienced actress tried to play the character, however Ogata really nails it. And it doesn’t hurt that she’s also gorgeous.

The other characters are just as good. There’s the unhappy housewife who wants to rejoin society played by Matsushita Yuki and the younger woman who strives to be at the top of her career while “having it all” (husband, child) played by Otsuka Nene. The plot is predictable, but even though you pretty much know what’s going to happen, you can’t help but watch everything unfold. The characters are interesting and there’s a lot of depth to them. While this is a romantic comedy, it does give a little glimpse into Japanese society and the issues that older women deal with in terms of marriage and career.

The set also comes in amazing packaging with a sturdy binding, velvet (yes velvet) interior. The Japanese really know how to package their stuff.

One of the things that really ruined the series for me was that the subtitles in the last two episodes were pretty bad. I’m lucky enough to understand Japanese, however my boyfriend does not so I had to translate every so often what was happening. For the most part the bad subtitles would give the general gist of things, but sometimes it was just plain wrong. Other times the words were just so garbled together it was hard to understand what was happening. The episodes themselves were confusing. Maybe it’s just the way it is in Japan, but the title sequence is halfway through the episode. I was really confused and thought that was the end of the show, so skipped to the next episode. Lo and behold I had missed a lot! I went back after the title sequence and discovered that, yes, there was more of the episode afterwards. After the title sequence there is also a preview of what’s coming up in the episode, which really sucks. It takes away any of the suspense.

Aside from these technical things, there are a couple issues I had with the story itself. For some reason, the supposed best friends don’t really do a great job talking to each other. The younger girl, Nao, offers clothes to Ogata, but doesn’t help out the housewife Mizue. In fact, Nao seems to look down on her. We rarely see just Nao and Mizue hanging out. Generally it’s Ogata with one or the other or all three. My other issue with the story is that I just couldn’t really believe the love story. There was no chemistry between the two main actors and I kind of felt like they were just really good friends. I won’t give it away, but I was really up in arms towards the end, but it all ended how I wanted, so it didn’t disappoint in that respect.

Overall, this is definitely a great addition to your Japanese DVD drama collection. If you don’t yet have one, then this is a good place to start. If you don’t want to drop the money, you can also watch the episodes on YouTube.