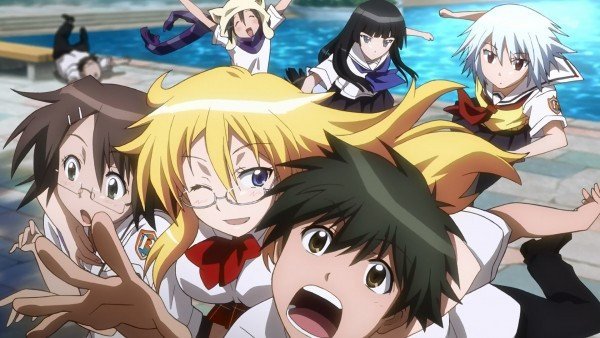 Is Ben-To worth your time?

What should I watch it on?

Right now Funimation is the only legal way to Ben-To. I totally recommend ignoring the horrible Funimation dub and just sticking with the sub titles. You can also buy the complete twelve episode series on amazon.com here. Unfortunately right now the price for it is insane at about fifty-five dollars. It’s a great show, but I’d pay no more than twenty bucks for the whole series, tops.

What did I think without spoiling it:

Ben-To is a fun gag/fight anime that is more about having fun than taking itself too seriously. Ben-To is a story about a young man named Yō Satō who is sent off by himself to a far away high school.  Unfortunately while he is enjoying his new found freedom, he has a very limited budget and can’t cook.  One day he hungrily stumbles upon the world of half priced bentos and the people who call themselves wolfs that fight for them. The concept is insane, and once you accept it you have a blast with it. This a fun show that had plenty of light hearted fun moments. Id say 95% of the show is about gags and character development and the rest is devoted to funny but exciting fights.

The show works because the protagonist play a great straight man to the lunacy surrounding him. Meanwhile the side characters do great at over dramatizing the things they do. Besides one character that I’ll get to later, everyone in the show seems to have a really interesting personality and a good bit of backstory that you really want to know about. Some things are explained and others are hinted it. This makes watching and rewatching the show feel that much more rewarding since by the end you pretty much understand everyone.

Ben-To also has a good but of fan service shots and one episode that just got a little too fan servicey and was just kinda weird/creepy.  But besides that unwelcome diversion the show as a whole was delightful. At twelve episodes the series feels a bit short, but its still a fun ride I recommend to any anime fan who wants a light hearted and fun day of binge watching.

The Funimation dub doesn’t do the characters justice at all. Its really, really bad so just do yourself a favor and just stick with the subtitles. The first episode is also a little slow, setting up the world and the characters so give it about 2-3 episodes to see if its your sort of show. 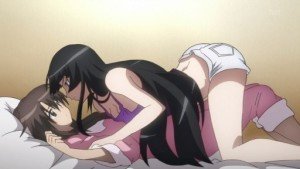 Episode Nine’s latter half is where things just get too weird for me with one female character obsessing over another to the point I was wondering what the heck I was watching. Thankfully right as its got to being too much to stand the skit ends. It really was weird and just finished cementing that the character of Ume Shiraume really was just shoehorned into the show. Again, not a huge deal breaker, just a character and point where Ben-To fell off a bit. I’m sort of ok with fan service, and I understand the show is catered to the crowed that enjoys it, but the show really didn’t need it as it was very entertaining before the episode 9 mess. I wish the time was better spent on other plot points and other more interesting characters. I totally want to see more Satō & Shaga. The two characters played off each other perfectly.

I loved Ben-To and nothing would make me happier than to get another season of it. The characters (besides Ume) were all very interesting and could totally have room to grow. The constant Sega references were really great to. After spending a weekend binging on the series and then re-watching it, yes I did go out and get some bento to eat.