Proof of  Monster Hunter Freedom Unite’s non-compatibility comes from its iTunes product page, which you can see below. It reads, “This application is not compatible with iOS 9 (including the beta). There are currently no plans to update this application in the future. Please keep this in mind when updating your OS.”

So if you own this Monster Hunter Freedom Unite and were a smart iOS user and updated your device, Capcom has abandoned you. With “currently no plans to update this application in the future” Capcom has earned itself my contempt.

This company, that makes millions of dollars in revenue, can’t update and fix a game it made last year and still sells today? This isn’t some cash strapped indie studio. This isn’t some commercial failure of a game. This is friggin’ Monster Hunter – a game featured on the app store. It’s a game many fans have bought and trusted to work flawlessly on their devices.

“Please keep this in mind when updating your OS.”

Really?  Hmm…do I decide to get more out of my iPad or do I not update simply so I can play this one game? 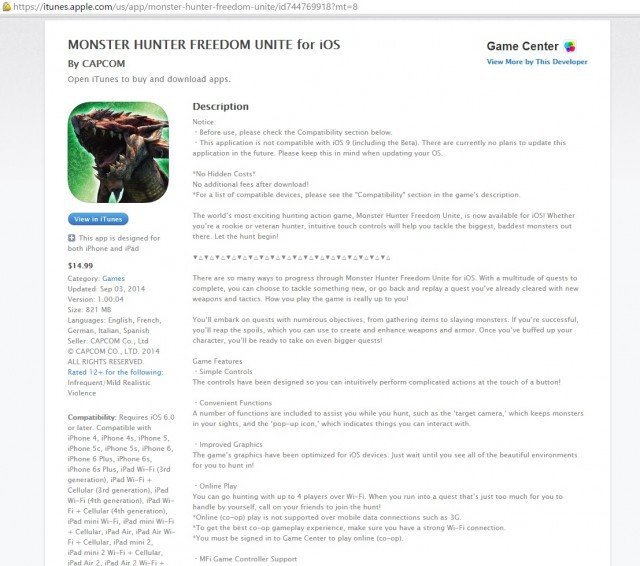 Fuck your lazy game support that makes players choose either to upgrade an OS they use every day or have a functional game they already paid for.  I’d love to see you pull this shit on the PS4, WiiU or Xbox One.

I wish Apple would ban Capcom and other big name companies who pull BS like this. I get the feeling they won’t, but they should. Personally, I won’t support Capcom anymore.  Why should I if they don’t seem to care about their paying customers?

BOYCOTT EVERY COMPANY BIG OR SMALL WHO DOES THIS!

This is already a common occurrence on the appstore.  If we, as consumers, keep allowing this to happen players will eventually lose faith in buying apps altogether. Indie devs have it hard enough without big name players like Capcom and Sega coming in and causing distrust in the marketplace.

iOS consumers shouldn’t have to choose between not updating and risking device security or playing a game they paid $14.99 for.  People need to update their devices. What happens when there is another security vulnerability discovered and updating is the only way to keep your personal information safe? Apple should not allow companies like Capcom to keep their game on the market place if it is not compatible with the latest OS version.

What do other game developers think of what Capcom is pulling? Check out the great tweets below:

For anyone that has Konami EA and capcom iOS games being pulled, our game was made but 3 people and we will never screw you over like that

We would literally pay money to keep our games available for people that downloaded it for free, let alone paid us money — Callys Caves 3 (@CallysCaves) September 25, 2015

So for companies that make millions of dollars off these games… What’s the excuse?