Not really. Candy Crush Saga is a freemium game. The bad kind.

What Should I play it On

Candy Crush Saga is a universal app. As always, I prefer playing on the iPad.

I really, really wanted to like the game. I’m a big fan of Match 3 games as evidenced by my glowing review of Bejeweled. This game has a lot of potential honestly. It’s frustrating, certainly, but all of those games are because there’s that random element to it. It’s as much about luck as it is about skill. That’s all fine and well, but you’re punished if you don’t happen to be lucky that game. Unfortunately, the game is overshadowed by developer greed. Maybe I’m just not that good, but I feel like unless you get that lucky first setup, you’re not going to advance to the next level for awhile. 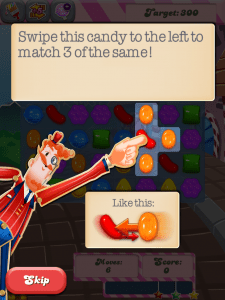 How Does it Play

The touch controls for the game are spot on. There’s no lag whatsoever. Each level offers different challenges: remove all jelly, get ingredients down to the bottom of the screen and earn a certain amount of points in a certain amount of time. I’m not a big fan of the timed levels as you can’t match candy while you have a cascade going on. So basically you have to wait until the cascade finishes to move again. This wastes time and with only 60-120 seconds, it could mean a matter of losing the level. It doesn’t make sense that you wouldn’t be able to match during this time since every other game like this has that ability. For the non-timed levels, you’re given a limited amount of moves, which makes this game MUCH more challenging than other Match 3 games.

The game is addictive. The idea of limiting the amount of moves for each board (aside of course from the timed ones) is a good one. It makes you take your time and think about your next move. It’s also a BIG game with 155 levels. There are different types of levels as well to keep it interesting. And for the most part it is interesting. The music to the levels is simple, but catchy. It was definitely in my head for the next couple days. The cut scenes advancing the “plot” are cute and interesting. This could be a really good game. Which brings me to the next segment: 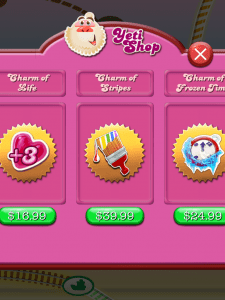 The game is full of in-app purchases – the bad kind. You can “unlock” bonuses after playing levels, but you can’t actually use them in-game unless you pay for them. The majority of them are in the $0.99 range, but some go as high as $39.99. This is ridiculous. On top of that, most of the items are one-time use only! It wouldn’t be so bad if you could just keep retrying levels, but you are only given 5 tries. Then you are “out of lives” and have to wait 30 minutes for 1 life to recharge. This means that you’ll have to wait 2.5 hours to get all of your lives back. And it’s possible that you’ll STILL fail to beat the level because of the randmoness. Sure you can promote the game through Facebook to get an extra try (or buy extra lives), but why should I have to? Why not just reduce the wait time to 5 minutes per life. Or heck, GET RID OF THE LIMITED TRIES ALTOGETHER? This just seems like punishment to the player and simple greed on the developer’s part. I’ve been stuck on a level for a couple days and then suddenly I beat it with 18 move leftover for no other reason than I just got lucky. I like a game that is mostly strategy with some parts luck and on that front, Candy Crush Saga doesn’t deliver. On top of that there are 155 levels, but you are only given the first 35 for free. To unlock other levels you need to, again, ask Facebook friends to unlock levels or pay for them. Seriously? And guess what after you complete the storyline you paid for you have to pay another $0.99 to unlock the next episode! This isn’t a free game at all! It wouldn’t be so bad if this was the “Lite” version and you could purchase a full version where you have unlimited tries for a level and could unlock all the levels. The developers could even keep the in-app purchases for the bonuses if they changed these two features. it would be fun and I would pay $0.99 for the game, heck maybe even $1.99!

I really wanted to like Candy Crush Saga. It has so much potential; it’s cute and it’s challenging. But at some point the challenging turns to frustrating. All the in-app purchases and limitation on the amount of times I can try to beat a level really makes me not like this game. It’s a money grab, which is a shame because there’s potential here. Don’t download it. Even for free, it’s not worth it. All it will give you is a headache. There are better matching games out there like Bejeweled and Zookeeper Battle.

Check out more of our app reviews!