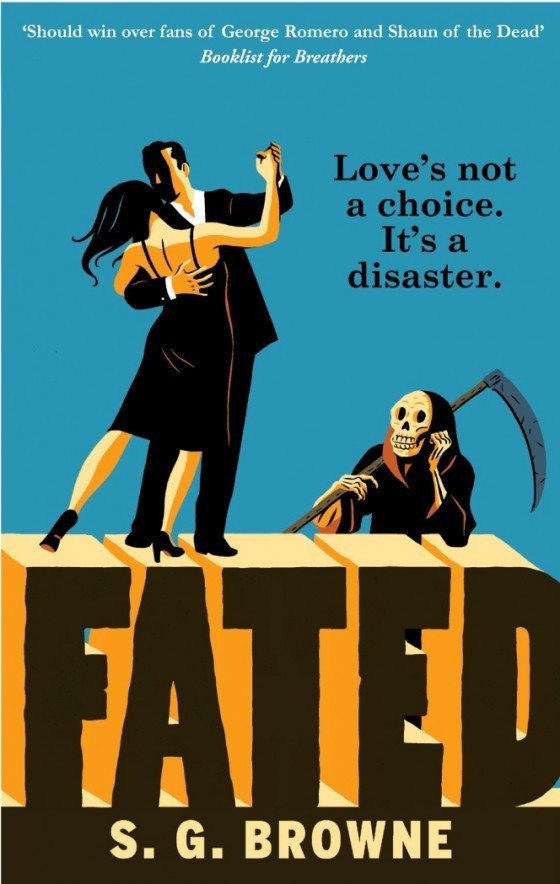 Fated is a fun book that brings personalities to the various invisible forces in our life like Fate, Destiny, Love and more. It’s a quick and easy read that somehow really gets you invested in all of the characters. You’re rooting for Fate and feeling his pain when he gets down. Brilliantly written. I’m definitely going to read more of S.G. Browne’s work.

People have been personifying things like Fate and Love for as long as humans have been around. S.G. Browne does a great job of humanizing each and every character that appears in their books and gives them each their little quirk. For example, Death is, ironically, necrophobic (and his name is Dennis). While the side characters are definitely bring their own pizzazz to the book, the plot focuses on Fabio who has been Fate for the past two hundred thousand years. It’s pretty obvious that Fate is getting pretty bored of his job and, dare I say, resentful of his post. Fabio’s voice leads you into this everyday world chock full of cynicism, sarcasm and truth, painting a modern portrait of self-absorbed mankind placating his mediocrity with materialism and rampant sexuality. It definitely has a philosophical slant to the book but never gets too heavy-handed. Fated has plenty of laughs and some pretty dark moments too. It can be a little hard to get into the tone of the book, but overall it’s definitely worth a read. It took me somewhere around 2 hours, but this was when I had no electricity so there were no other distractions.

In all honesty the romance itself didn’t really work for me. It seemed more of a plot device to get Fate where he needed to go, but maybe their love affair was Fate’s fate. The writing style also got a bit repetitive. Sure, people have ways of talking, but I kind of got tired of the whole: The thing about (insert name) was that he was a (insert adjective). The last 1/4 of the book is definitely a bit of a downer but it makes sense. Aside from that, I can’t really find any complaints and even the stuff I didn’t quite like, I quickly got over. It’s a fast-paced and delightful read that will definitely get you thinking.