The below freezing weather didn’t keep people from attending the 2015 IndieCade East held at the Museum of the Moving Image. I entered with Bernardo, bright eyed and bushy-tailed to try out some amazing indie games…after I got something to eat. Not surprisingly, the cafeteria section was crowded but not for the food (though the ham and cheese sandwich was tasty). Featured prominently in this busy area were Sony games for both the Vita and PS4. 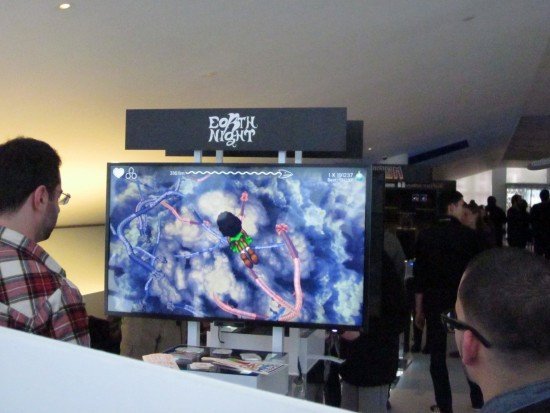 The game that immediately caught my eye was EarthNight by Cleaversoft. At first glance, the game seems deceptively simple. You run across the back of a dragon and jump on enemies to boost your speed. At the end you stab the dragon and then skydive down to another level. As I was watching people play the game I was amazed at how tight the controls were and just the beauty of the game. Everything about it was polished and just pulsing with life. It was difficult to tear myself away, but I had to check out the rest of the exhibits.

The event spanned three floors of the museum, which might sound like a lot, but it was pretty compact overall. Besides Sony, the first floor also had indie games for Nintendo on the 3DS and Wii U and indie mobile developers. The second floor featured games that fit the theme of Love and Rejection, a compilation of games that deal with sex/love and games that were rejected as well as some pretty nifty Oculus Rift games.

As an event held around Valentine’s Day, the theme of love and rejection makes complete sense…and also makes for a hysterical exhibit. Realistic Kissing Simulator – It’s a 2 player game (duh) and you both try to manipulate the tongue on each character to simulate kissing. It’s kind of horrific and really funny. We weren’t so great at it, our tongues ended up just lolling out of our mouthes the entire time.

Dark Room Sex Game – The first time we passed by this game we saw a couple um…getting pretty close to doing a real-life simulation of the dark room sex. They were escorted away from the game and the chairs were taken away. There are no instructions telling you what to do. All you have are two devices that vibrate and make noises when you move them. We learned later on that you need to move both in unison to get the effects to work. You know, kind of like real sex.

I really only played one game – Phone Story HD game. You take part in the various atrocities necessary to make smartphones such as saving Foxconn workers from committing suicide and pointing guns at child slaves to mine necessary ore. It was apparently on iTunes for a couple days then removed…I wonder why?

I was pretty psyched about Nintendo after attending their self-publishing talk and was happy to see some pretty awesome games and try out the newest 3DS. Let me tell you, freakin’ awesome. I’ve played around with the 3DS at game stores and most of the time the screen has taken so much punishment it’s unusable. On top of that the old 3DS had a very small “sweet spot” range for the 3D. I often found myself just reverting to 2D. With their latest 3DS all of these issues have been fixed and they added a new button, which made first person shooters much easier to play. The representatives at Nintendo were also very friendly and we got a free hat from them by just filling out a simple survey of our favorite games on display.

My favorite of the bunch was definitely Gunman Clive 2. I just enjoyed everything about it from the gorgeous hand-drawn art style to the dynamic platforming gameplay. While it doesn’t require the 3D effect, it does give the game a nice sense of depth. The controls are fairly tight though I did run into a couple areas where I couldn’t quite figure out how to progress when a building collapsed. But other than that, it’s a really stunning game.

There weren’t a whole lot of mobile games on permanent display for the event though several did take part in the Show and Tell portion of IndieCade East. My personal favorite Show and Tell game was Bunny Love. The goal is to chase around your mate and make babies in order to repopulate your world. When you smooch three times you create a kind of Katamari ball where you can pick up evil wolves and other baddies.

Besides the games there were also a lot of great talks on diversity, building communities, how to game design and how to get into voice acting. And of course the museum itself was a lot of fun. A lot of the installations were interactive so you could create your own stop animation with your hands or dub over classic movies! While it was a lot of fun, I think there is still room for improvement. It would have been great if the lectures were staggered a bit more so there wasn’t so much overlap. As well, one of the theaters was more of an open air stage. It was located right next to the Nintendo booth and there were also some games on display in the same area. This made it very difficult to hear the presenters because there was so much background noise. There also seemed to be a level of disorganization among volunteers as many had no idea what was going on or where things were located. Of course, this is only IndieCade East’s 2nd year so I can forgive some of these issues. Hopefully it will be a bit more organized in upcoming years.