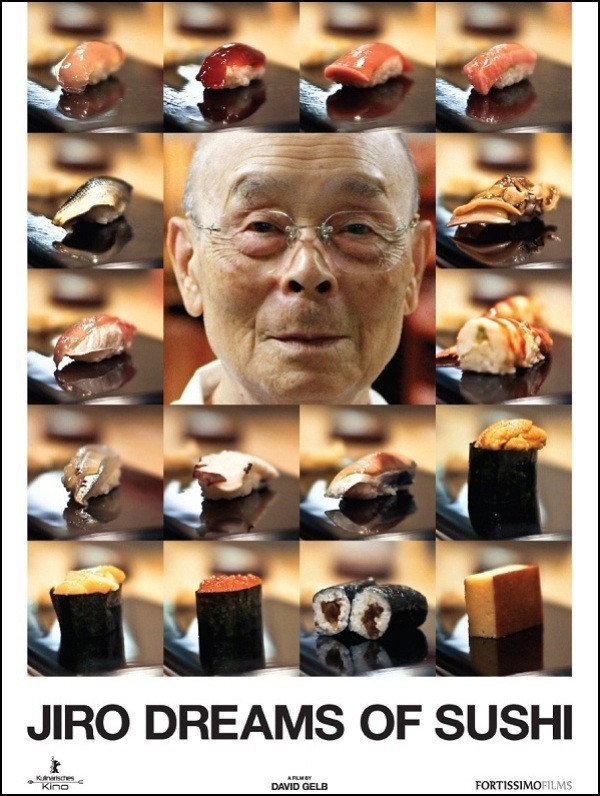 Jiro Dreams of Sushi is available for free streaming for Amazon Prime customers. I suggest watching the HD version to get the best experience.

Jiro Dreams of Sushi is an excellent documentary that gives an amazing glimpse into the world of sushi as well as Japanese work ethic. It’s uplifting and motivating and really makes you want to visit Jiro’s sushi shop before he dies.

It works on so many levels. Jiro Dreams of Sushi is an amazing story about a man who works constantly to hone his craft. It’s not really about perfecting the art of sushi, it’s improving upon it, day by day, year by year and so on. This idea is so ingrained in the older Japanese generation that perhaps it’s a matter of course. So much of the Japanese work ethic is about doing one thing and doing it well. There’s no sense of “perfection” it’s simply about improving yourself. When you get to the next level, you realize how much you still have to learn. There’s a humility and modesty about mastering something, which shines through Jiro. The man has been making sushi for 75 years (at the time of the documentary he was 85) and he still strives to improve, to find new ways of making sushi, yet keeping it simple. The idea is that simplicity leads to ultimate purity, another common theme in Japanese culture.

But this isn’t just a look into Japanese culture, it’s also a very personal look into Jiro’s life. Here’s a man who is passionate about his work, so much so that his own kids didn’t know his face when they were children. A man who hates holidays because he is lost without his work. For a man who has such a strong work ethic, it’s hard to believe that Jiro was a trouble-maker when he was younger, but that just goes to show how much people change when they find something worth pursuing. It makes me take another look at my own life and think: “What is there in my life that I want to be doing for the rest of my life?”

But this isn’t just about Jiro, it’s also about his sons. His youngest son has opened a second store in Roppongi while his eldest continues to train under his father. It’s interesting to note their relationship and to understand that the eldest has the honor and burden of carrying on his father’s work after his death. He cannot simply follow in his father’s footsteps, he must exceed his father in order to make his mark. At points for the son, it must be exhilarating to know that he’ll one day own the famous shop and also terrifying. The documentary perfectly captures their relationship, though I wish the youngest son had a bit more air time.

Aside from this, of course, is the sushi. There are some wonderful closeups of all the different types of sushi Jiro creates…and it’s mouthwatering. Sure, it’s just fish on rice, but even on screen it’s obvious to see the quality of the end product. Apparently there’s a month wait time to eat at his restaurant, but after the release of this movie, I’m guessing it’s going to be several months. I’m already planning my trip to Japan.

Nothing. The documentary does a wonderful job of showing a master of his craft. There is even a little environmental message in there as well. Perfectly executed.