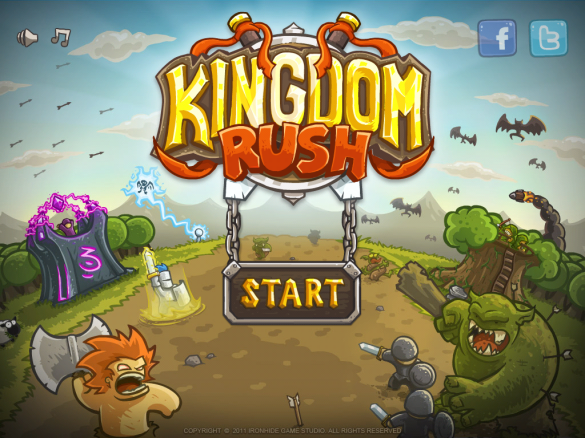 A content and balancing update to Kingdom Rush, the best tower defense game.  Ever.

Check out our review!

Two new stages to play and replay, one new boss, a new hero unit, and a store that uses a new form of gem currency to buy one time use items. More Stars to get for a total of 85.

What do we think of it?

Go ahead and update Kingdom Rush.  Nothing wrong with this patch.

The minute I saw the store and the in app purchases for crystals I thought all was lost.  Then I discovered its REALLY easy to earn crystals in game.  YOU DONT NEED TO BUY GEMS! After a single game I had almost 500 gems.  Considering the most expensive Item in the in app store is 999 crystals that’s not bad at all.

Once again Iron Hide Game Studio has added more value to an already exceptional game.  Raising the bar at what a quality app should be and showing other game developers how to add in-app purchases to a game without alienating the fan base.

There is also a new hero to purchase.  King Denas brings with him two new special abilities: Royal Edict & Catapult Barrage.  He is worth the .99 cents.

Now about those two new levels & getting 85 Stars:

This guide and walk through assumes you have already reached 75 Stars in Kingdom Rush.

1. Hushwood:  Beat it on normal & the challenges 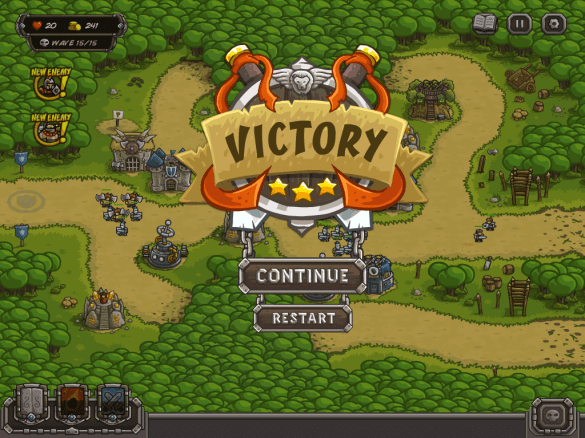 Kingdom Rush’s Hushwood was cake my first time in.  I just built smart and made it out with all twenty stars.  It is a really fun level and they throw lots of bad guys at you so expect to have an easy time leveling your hero when you do decide to use one.  My first play through was hero free. I wanted to make sure the levels were beatable without them and sure enough they were.  As simple as the normal mode is the challenges can be a bit challenging.

Normal mode:  As you can see from my winning pic, it’s totally doable with 20 hearts.  What I focused on was the last part of map, which became a perfect choke point.  I used a Tesla tower to defend it with two barracks for a majority of the game.  later on I put up a mage tower on the bottom and in front of the Tesla to help keep that area a kill zone.  It’s pretty easy to get a lot of gold in this run so max out your early units fast and then start moving your defenses up.

Challenge mode Strategies: Honestly you can pretty much use the same strategy with both.  Build heavy towards the back with knights and Tesla Towers. I made one tower further back for Vikings for their awesome ranged and up-close DPS.  But really once your knights and Tesla’s are up and going not much is getting by you.  I made the big cannon tower further up just because I had extra gold. I don’t think it did much for me, but it’s pretty. 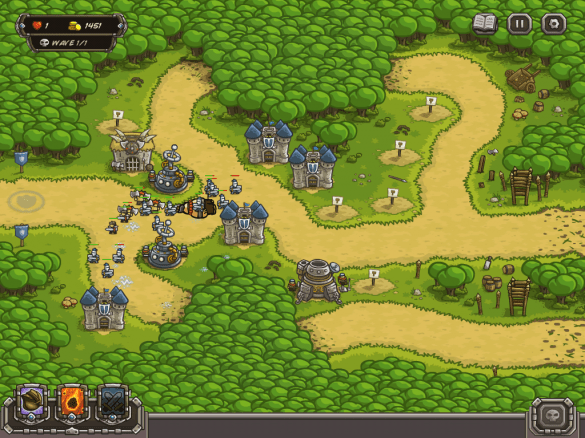 2. Bandits Lair: Beat this and the challenges on normal 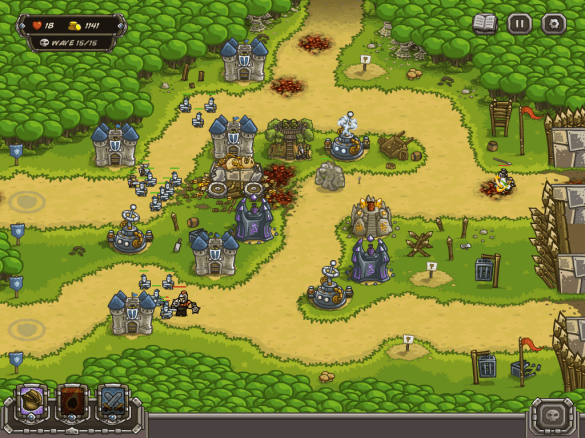 This was a tough one.  But still very fun and not as cheap feeling as the Rotten Forest.  They throw A LOT at you, but with some practice you can beat the bandit king with all three stars.  I have to say the last boss looks cool and is no joke. Im just thankful they didn’t bring back the Rotten Forest Boss…. I still have nightmares…. 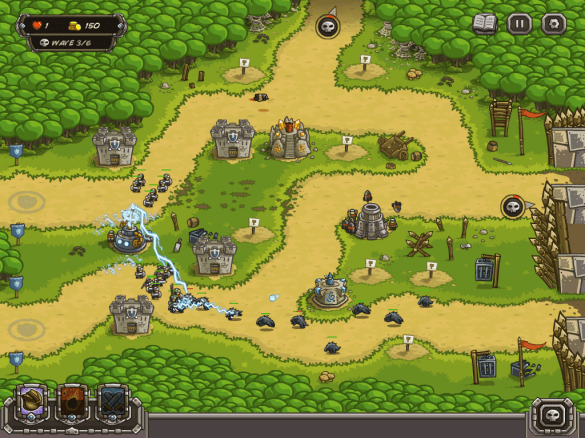 Aw the Tesla tower… Is there any tower as epic in Kingdom Rush?  In this level it would be the Holy Order tower to make Paladins.  But the Tesla is key here.  Have one up and running right at the start of game and flank that baby with barracks, four of them.  The larger villians will prefer to attack the top path while the smaller faster ones will come from the bottom. This is doable but you need to pay attention.  Once you feel like you’re able to add more towers and make sure you group the large Pillagers together when you drop your meteors.  The Kingdom Rush Encyclopedia says that these guys are strong against magic but putting up Sorcerer towers definitely make killing these guys way easier.

And then the end result: 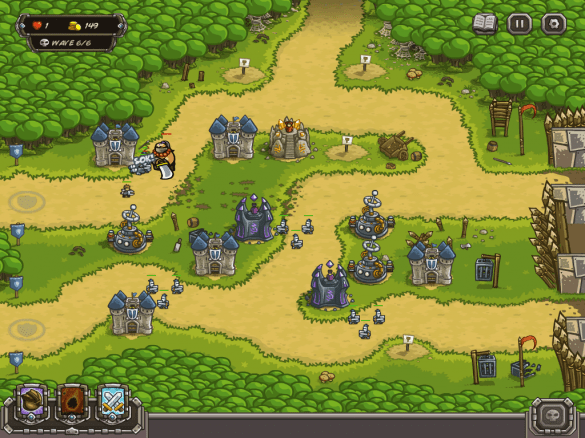 So what you’re want to do here is have an upgraded archery in the middle flanked by four barracks.  Then further past them are two almost fully upgraded Archery towers.  This way your soldiers keep the baddies stuck between towers. As time passes, max out your Archery towers to Ranger Hideouts.  The speed they attack the moving targets with is key here.  I tended to drop my reinforcements right under my first maxed Ranger Hideout.  This way they were able to focus the spears they throw at the Marauders that seemed to prefer the lower attack path.  Slowly upgrade your soldiers to knights and then add more towers as you raise your paladins’ abilities. 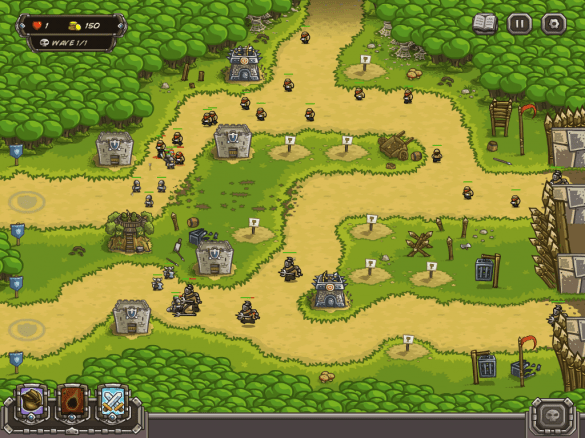 And then the end result: 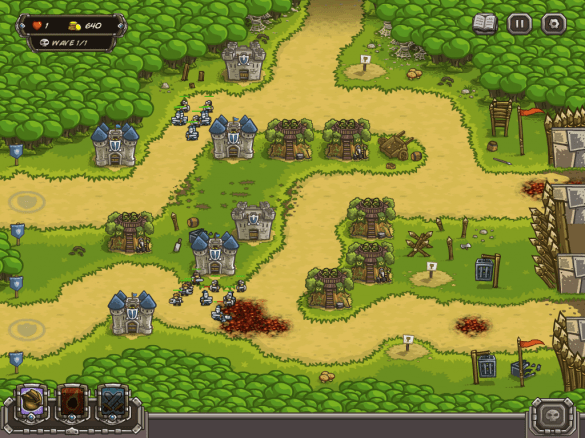 That is how you get 85 Stars in Kingdom Rush. 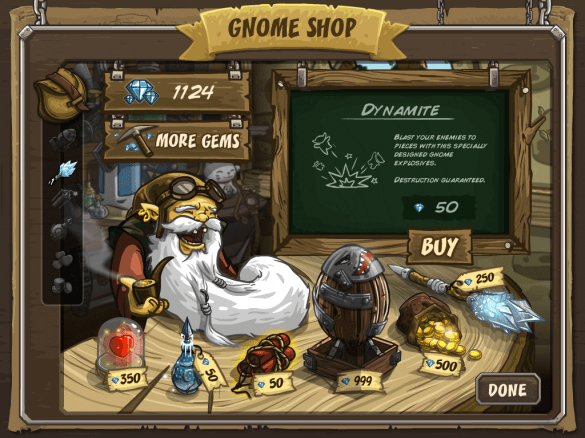 I’ve got no qualms about this.  For a rabid player like myself and many other fans its going to be insanely easy to rack up tons of gems.   We aren’t being price gouged by Kingdom Rush at all here.  I think this was a smart addition to the game.  If I want to use my spare gems and nuke away, then so be it.  If i want to start off with extra gold then that’s awesome too.  The in game store doesn’t take away from the game, it just adds to it.  If you want to hand the game off to someone else and are outta gems and they need help, then sure spend a buck or so and buy a few bags of gold to help ’em out.

The items themselves are pretty self explanatory, and awesome.

Personally I wish I had the option to pay .99 cents or so to permanently start every map (Once beaten with three stars and the challenge modes too) with an additional 500 gold.  I would totally do this.  I would also be keen on paying .99 cents to have that lovely ice wand full time.  To keep people from complaining that it’s making the game to easy, have the purchases only available after you get all 85 stars.  That way it’s for the devoted fans who are willing to screw around and just want to log on and kill stuff. 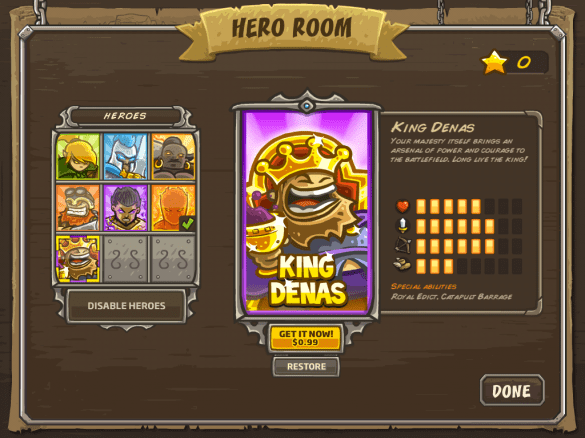 King Denas is a wonderful addition to the roster:  he’s powerful, fast and really darned funny.  He is best utilized right behind your ground units and next to a few powerful towers.  One of his special abilities includes speaking some gibberish and powering up nearby towers.  He also tosses random items at the bad guys dealing decent damage.  He can take some hits, but as always don’t ignore your hero.  Another awesome ability of his is Catapult Barrage. He stands up on his servant carried mobile throne and points with sword at some unfortunate baddies and down comes the Catapult Barrage on some unlucky villains.  Too cool.  Everything King Denas says is funny and he had me smiling and laughing the few levels I played with him.  In my opinion he is totally worth the .99 cents. 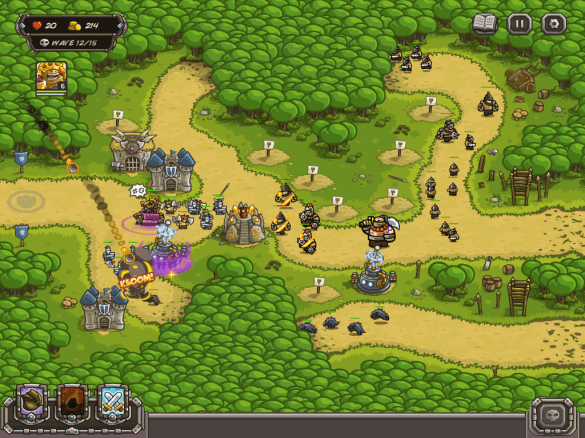 Check out the rest of our App Reviews here!

For more info check out