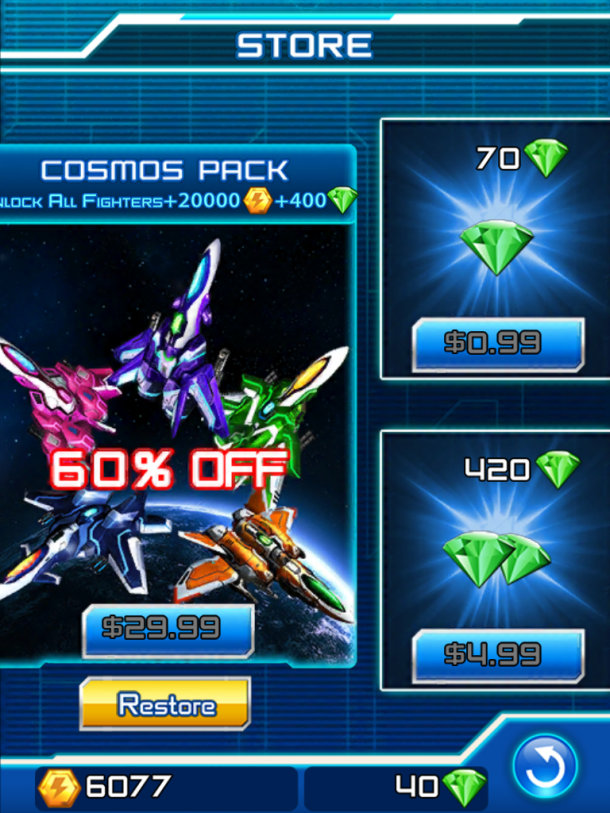 Yep… This is one of those games.

No.  Unless it’s free avoid this.

Lightning Fighter 2 HD  is an universal app for iOS 4.3 or later. With everything going on I would only play this on an iPad.

Lightning Fighter 2 HD  is a shoot’em up that costs $2.99 but was designed as a bad Freemium game. What that means is that you will most likely never be able to afford all of the planes in the game. If that wasn’t annoying enough, the best items, like coin magnets, are gated behind a special currency of gems. Coin magnet sure would have been useful as the game drops very few coins and are pretty much impossible to collect once the action revs up.

As far as the gameplay: Meh… For a shoot’em up it’s just kind of dull and repetitive.

This game was designed to make it just about impossible to unlock the best planes, but it still has the gall to charge you a $2.99 admission price. Avoid this

The game seems to have some sort of login system that doesn’t work all of the time.  I first played Lighting Fighter 2 for a while and cleared the first difficulty, then I came back to it a few hours later and all my money was gone. Considering how hard it is to earn money that is a huge problem. The  stages are still open but again all of my coins were gone.

Earning currency takes too long for a game priced at $2.99. Different planes cost insane sums of gold you seemingly will never be able to earn. In the harder stages and difficulties you will just not be able to collect money because there is so much action going on and the money just falls away from you. If you want those better planes you are just going to have to spend real money.

The only useful weapon in game is the homing laser. For many boss fights you will find yourself pinned in the corners and depending on your homing lasers to get the job done. Weapon balance sadly doesn’t exist here. Spread and missile weapons are all but useless. Some of the bosses require that you spend more of your hard earned in-game money for the shield boosts as they shoot totally unavoidable waves of attacks. Thanks to the cheap boss fights you really won’t be able to save up any money since you need to spend a good amount to progress.

There aren’t many levels and the levels are short. The action, while short, is fun for a bit but then oddly starts feeling monotonous as you play through.

Worst of all, the majority of useful boosts are gem only. Continues also can only be bought with them but you can’t earn gems in game. Want to have a useful magnet to be able to actually earn money in game?  Gems.

Lightning Fighter 2 HD does all the things it shouldn’t for a Freemium game, but what makes this worse is it costs $2.99