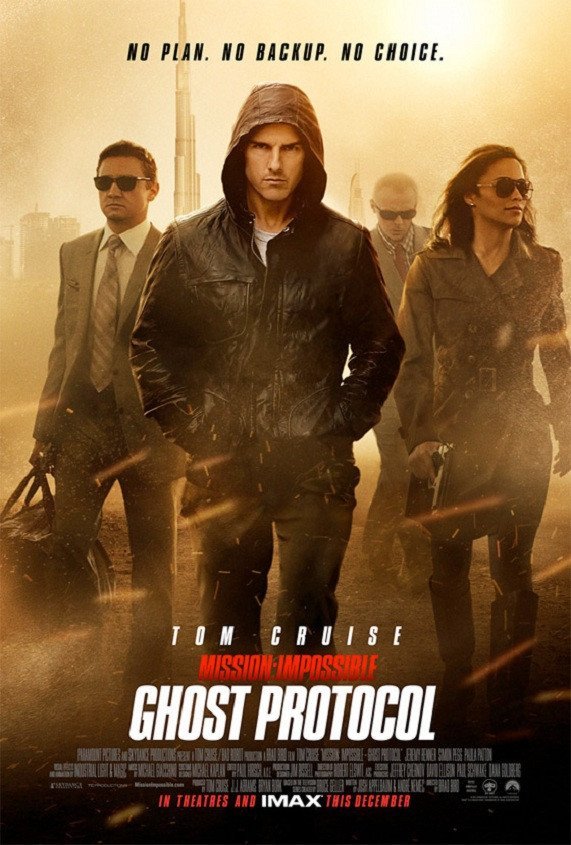 There’s something a little down and dirty about this Mission Impossible in comparison to the others. Things don’t necessarily go exactly as planned and it makes the viewing more enjoyable because mistakes happen. Tom Cruise still looks great despite being almost 50 and the action scenes are pretty rough and tumble. The other characters have a good amount of screen time and the action has moved from being Cruise-centric to a more team dynamic. The girl – Paula Patton – does more ass-kicking than the females in the other movies. Even the new guy, Jeremy Renner, gets some good action sequences in there and does some of the crazy action sequences that would usually be reserved for Cruise. I did have a couple qualms with the film, most notably the opening sequence. The credits pretty much gave little snippets of the entire movie, which took away from the experience. The movie was also a little too long at 2 hours and 15 minutes. There were definitely some scenes that could have been shorter, but it was still an enjoyable ride.

There’s something to be said about the times when things don’t work as planned, it makes the action more believable. Sure in almost all of the M:I movies something doesn’t quite go as planned and there’s that tension, but almost every crazy stunt that happens, the calculations are just a little off. In the beginning scene, Cruise zip lines down to a truck and misses, leaving him a little stunned on the sidewalk. When he’s jumping back into his hotel room after he realizes the water hose is too short to reach, he bangs his head on the window. The best is towards the end of the movie in the parking garage. Cruise jumps for the suitcase that has landed on top of a car on a moving platform and, instead of landing gracefully, bangs up his head again. Now I’m sure the stuntman has protective gear, but man, that looked like it hurt. This movie should be called Mission: Concussion.

Aside from the action, there are just some things that irked me. Simon Pegg plays the same character in all his movies, but now they’ve amped up his part as comedic relief and it’s a bit much especially when he and Cruise are infiltrating the Kremlin. While I liked the characters individually, something about them together didn’t work, there wasn’t any chemistry. The arguments and big reveals didn’t have quite the impact that they should have. It reaches a predictable ending but at the end of the day, we’re not watching the movie for surprises, we’re watching it for the action. Overall, it was a fun movie with excellent action sequences that will make you cringe in pain at some of the stunts.  The on-location shots are awesome and it’s a great movie for a Saturday night if you don’t want to go out.