Vegucated: Worth Your Time on Amazon Prime 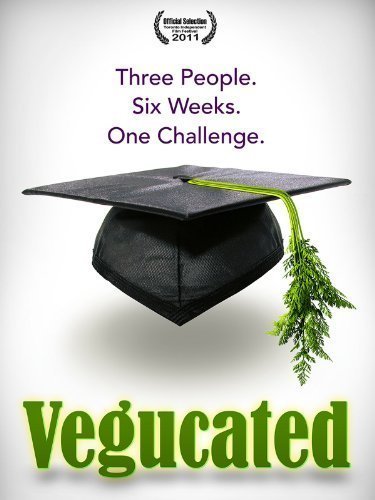 For those that haven’t watched Food Inc., Forks Over Knives, then yes.

There’s a lot of reasons why Vegucated works. The main reason is that the girl who is directing the documentary is super cute. I think a lot of guys would go vegan for six weeks if it gave them a chance to hang out with the cute blonde. Besides that, I do feel like the documentary goes over some very important issues regarding the treatment of livestock on the farms as well as various health and environmental issues that revolve around the meat and poultry industry. The three candidates were a nice mix of demographics: there was the young Hispanic girl who still lives at home (Tesla), the male college-graduate who strives to be an actor while waiting tables (Brian) and the professional middle-aged, single mother with two children (Ellen). Each of them, while different, want to eat healthier, lose weight and feel better. While we get a very beginner primer to what things are vegan and what are not, I kind of wish they went into more detail really creating a meal plan for each individual. After all, in some respects it’s easier for the single mother to go vegan versus the Hispanic girl who lives at home with her family. Aside from this, I thought the movie did a good job of pointing out the various reasons why people go vegan although it did tend to get a bit heavy-handed with the message.

There’s a lot I would like to say regarding this documentary, but none of it would be related to the movie. Let’s just say I am not a vegan and I don’t plan on being a vegan even after watching this documentary. I was really hoping that this would be an actual documentary on these three people and their struggle to become a vegan, but it ended up  being a message on the horrors of industrialized meat and how eating meat is evil. I think that opening people’s eyes and getting them to see the truth about meat farms is incredibly important and long overdue. I just felt like that segment lasted too long. After learning about the meat trade through an informative video, Ellen calls up a chicken farm to ask about their treatment of animals and learns that, yes, everything she saw on the video was true. I thought the phone call was pretty interesting actually. The director, Marisa, stated that the farmers probably wouldn’t know how to answer since they wouldn’t be expecting the questions, but the farmer on the phone was pretty knowledgeable and up front.We then have Tesla and Brian trespassing on a farm to see the truth for themselves and lo and behold they find three dead pigs on the back of a wooden trailer. Yes, we  saw the video and heard the phone conversation so why do we also need to see Tesla and Brian trespassing? Why do we need to see them freeing chickens onto an animal sanctuary. Yeah, it’s cute and everything, but what did it really do to help me learn about veganism? It was nice to see all three lose weight and reduce their blood pressure and cholesterol levels at the end though.

Overall, I think the movie was an interesting look into the world of veganism and not nearly heavy-handed as Food Inc. I believed Tesla, Ellen and to a lesser extent Brian, I just wish the movie was more about them than the vegan message.