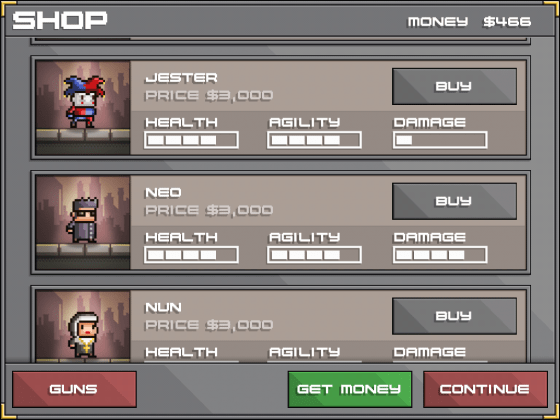 Random Heroes plays perfectly on iPad, iPod touch and the iPhone iOS 3.1 and later. You get the same great experience with all devices. As always I prefer gaming on my iPad 2. 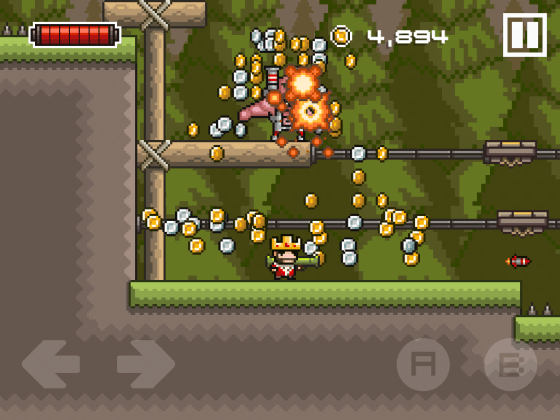 It’s all about the coins. 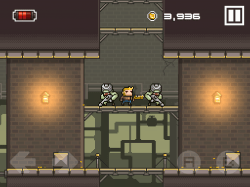 Random Heroes is totally like having a classic Nintendo game in your hand, for free!  Here you and a seemingly random collection of heroes fight to stop an alien invasion.  It works great.  The game is built on a currency system for upgrades.  You want better health or a more powerful gun, you better save up to buy a stronger character and that homing rocket launcher.  It took me about two days of on and off play to finish the game with one new character unlocked and two new guns.  I have to say I really enjoyed it.It has in-app purchases for coins if you don’t feel like grinding out the money you need and want to just start slaughtering from the get go. For a Freemium game, you get more than most paid apps offer. 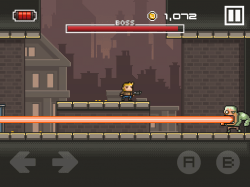 So avoid the lazer.

The controls are perfect.  The graphics are fun and the music is engaging. Every once in a while I noticed some bad guys would get stuck in a corner and be un able to attack me.  But as long as they were killable for their precious coins it was all good.  I also encountered a random bug where the bullets for my Desert Eagle dipped down after firing and shot at a lower plane.  It wasn’t a big deal, just mildly frustrating.As a game geared towards in app purchases honestly it wasn’t that hard to get coins.  Sure there was some grinding involved, but it wasn’t an ordeal. There is nothing you in the game store that is so astronomically priced that would force you to spend a dime.  But if you want to thank the Woblyware and Ravenous Games for this, sure go ahead and spend a few bucks.  I recommend the Homing Rocket launcher.

A level based platformer that tosses out the tired and over used star scoring system and leaves behind baddies with coins.  Precious, precious coins.  In this game you are going to want to kill as much as possible to save up coins to unlock a stronger hero to play with and some way better guns.

You are going to find out pretty quickly that you are ill equipped to handle the levels with the hero and guns you start with.  My first pick was the gun upgrade (Desert Eagle) and it was a noticeable killing improvement.  After that it’s just saving up for a better character.  But wait, if you save a lil more you can get a way better character, and if you save even more you get a really cool one.  That’s the train of thought that immediately popped into my mind.  I went from wanting the Office Worker who reminds me of the guy from Beatdown! to ending up with the King. 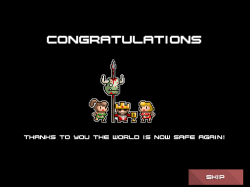 The random glitches were annoying. The flying baddies are often positioned in places where you don’t have much room to maneuver to fight them.  This makes me give a second thought to trying to beat the game with a weaker character for the challenge of it.

As Random as the Heroes were I wish the level design followed suit.  Until the Forest level, they all just blended together.