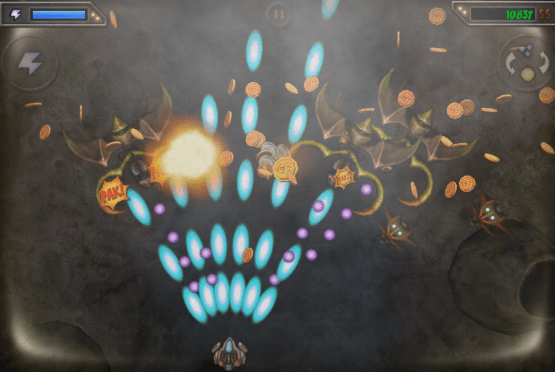 Give me all your goldz aliens!!!

Sela the Space Pirate is a universal app iOS 4.1 and later.  Honestly I can’t imagine wanting to play this on a smaller screen than an iPad.

Sela the Space Pirate is a really fun shooting game that really tests your skill and rewards you with tough, but doable gameplay that stays fun long after you beat it. This is just fun classic shoot em up game that would be right at home in a fancy arcade cabinet but also works very well on the iPad.  The graphics are good, the music is great and the gameplay is just tons of fun.  If you love great shoot em ups and don’t mind a good bit of grinding for upgrades, this game is for you. The real star of Sela the Space Pirate are the awesome comic style cut scenes that happen every time you start and finish a level.  The banter between the two characters is just hilarious.  Please make a web comic.  Please make some content update or a quick sequel.  I want more.

If you love SHMUPS just buy this! 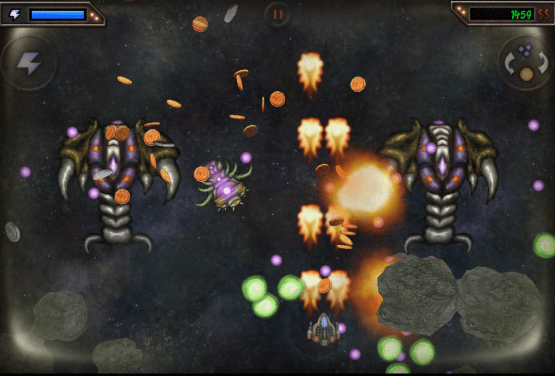 There is a lot more action that happens, I just never remember to do a screen shot.

Great!  No lag, great music, art, level design.  I am shocked because I normally hate, HATE shoot em ups on the iOS.  The controls never feel tight enough, the action just never seems to work on screen and quality is all over the place.  Sela the Space Pirate is better than any that I have played before.  It’s just good ol’ fashioned fun.  The upgrades really give you a feeling of progression, the insane prices they cost later would normally be a problem for me, but the game is so much fun I didn’t mind grinding at all to max out my stuff. 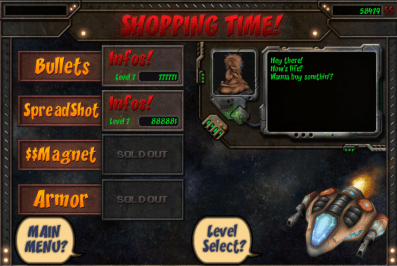 I’d like another level to my shield upgrades please, or maybe an additional button on screen that I can use for another shield.  The last boss fight is ridiculously tough to the point it feels more like luck to me than skill.  I won, I was super excited and outta breath by it, but damn.  That was insane. The upgrade prices just reach levels of lunacy as you get further in.  Oddly enough the game cracks jokes about in app purchases.  Thankfully, they don’t have any or it would have felt like a cruel money grab.  Fear not though, you can max everything out, but you’re gonna have to grind.

I really wish some more purchases opened up when you beat the game.  Even some purely vanity type items would be nice. What do I do with all my coins now?