TENNIS IN THE FACE Review Tennis In the Face plays perfectly on iPad, iPod touch and the iPhone iOS 5.0 and later. You get the same great experience with all devices. As always I prefer gaming on my iPad. Tennis in the Face Gameplay 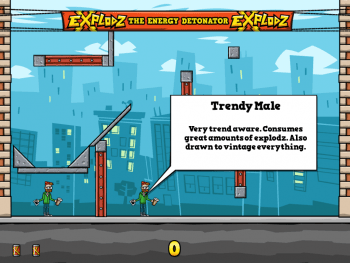 If you’ve played King Oddball and loved it (Why wouldn’t you?) you are going to feel right at home with 10tons newest hit game Tennis in the Face.  Here we take the role of Pete Pagassi as he goes on a one tennis player rampage against the Explodz brand energy drink. Don’t worry Tennis in the Face is a very lighthearted funny “rampage“. Once again we are treated to a deceptively simple game that you will find insanely frustrating and addicting at the same time. The game is so similar that most of what we praised King Oddball for can be said for Tennis in the Face.  Thankfully the gameplay is different and fun enough for me to honestly recommend. In this game you are an ex professional tennis player who uses his racket and balls to knock out your opponents.  Aim and serve your way to headshots and fun here.

This game is as much about physics and timing as it is about random luck. 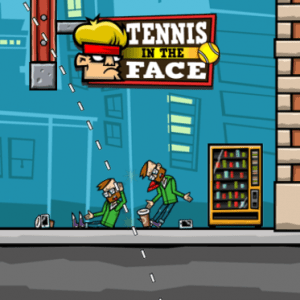 Just like King Oddball you find yourself taking down your enemies without things going exactly as you would expect.  The ragdoll physics and the objects you interact with sometimes move with a mind of their own.  You can take the same shot a few times and you’ll get drastically different results, leading to some very hilarious and unexpected wins.

That random nature of the game actually adds to the fun and excitement and satisfaction you feel when you finally beat a level. Once again I find myself holding my breath as I play. Letting out sighs of relief when I beat a level. There are other times I end up beating a stage in some random, accidental way that just leaves me laughing with joy and relief. Yes this is very much like King Oddball.  And that’s not a bad thing. Once again 10tons gives players a lot of content and plenty of challenges to be had.  Taking down the evil Explodz energy drink corporation will keep you busy for a good weekend.  Plenty of challenges and replay to be had here. 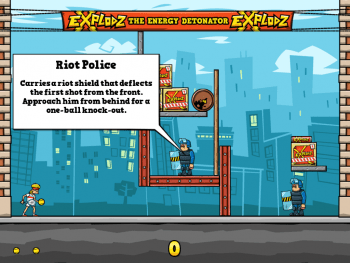 Enemies get tougher as you play

The plot is really funny, the art is great, and the music keeps  you going and stays in your head long after you put the game down. Just like angry Birds and King Oddball expect to find yourself frustrated often.  EVERY LEVEL IS BEATABLE! So calm down and keep trying.

The extra challenges and modes will definitely keep your attention long after you beat the game. 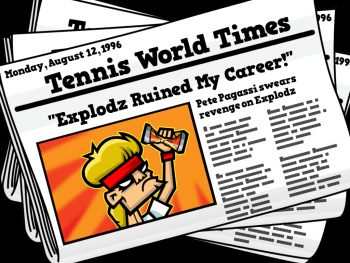 Once again 10tons has brought that “it feeling” to Their newest game.  Tennis in the Face brings challenging gameplay that borders on impossible, but always doable, and for some, borders on masochistic.  Every single time I beat a stage that was driving me crazy I was rewarded with this great feeling of accomplishment that you don’t get from most games.

I’ve spent the past few days with Tennis in the Face and I am still working on unlocking some more content.  It has replay value that most other games just don’t have nowadays.

I don’t like how these mystery gifts are behind some really tough achievements.  I feel like Tennis in the Face is hiding some gameplay goodies too far out of reach beyond most players.  I understand wanting to reward the hardest working players, but I prefer King Oddball’s approach with having the challenge modes and bragging rights being reward enough.

The game doesn’t get incrementally harder as you would expect it would. Instead it’s  a random mix of “sort of easy to ”I wanna throw my iPad out of the window!””  Oddly it works.  I just wish the physics were a little more consistent.  I say that knowing that the inconsistency is part of the appeal in the game.   Yes it sounds weird, but you have to play it to understand what I mean.  By then you are already hooked. 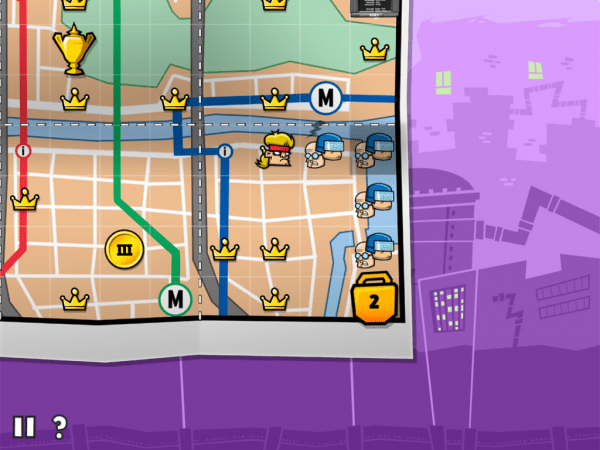 Good luck getting those crowns!

Yes this review is very similar to King Oddball, but that’s just because 10tons took a winning gameplay formula and tweaked it.  Tennis in the Face works and it deserves your paid download.