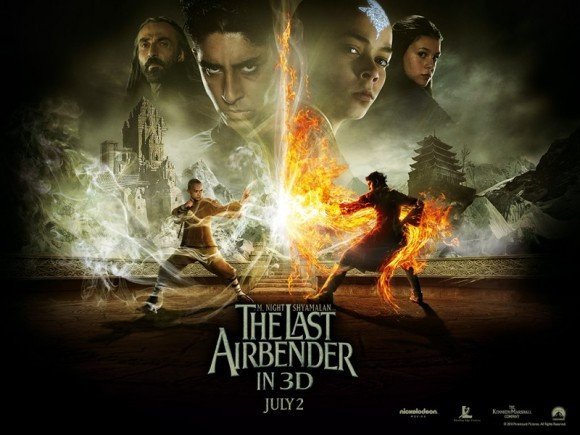 NO. Not even for free on Amazon Prime Streaming.

If you do plan to watch The Last Airbender, the best way to view it is on Blu-ray.

If you’re a fan of the TV show, Avatar: The Last Airbender, you’re going to be really disappointed. The funny thing is that the movie practically follows the plot of the actual show, but it’s just lacking in so many ways. I was super excited when I saw the trailer for The Last Airbender, then I saw that M. Night Shyamalan had written, directed and produced it and that excitement faded away. I thought, “Hey, it’s not like it’s an original story and the show is so good he can’t possibly mess up.” I was wrong. Don’t watch this movie.

Everything. Sure it’s difficult to transform a TV series into a condensed movie, but it could have been done better. The Last Airbender is a horrible transfer and may scare people who have never seen the series off of it. It’s that bad. The characters are all unlikable. The main character, Aang, is supposed to be childish, playful and lovable. Here he just acts a little too mature. Sokka is supposed to be the comic relief, but he’s far too serious. None of these characters develop. They’re all incredibly one-dimensional. For a movie that spans 104 minutes, you’d think that we could at least like one character, but there are no redeeming qualities in any of them. There are also some obvious 3D moments which really make the movie that much tackier.

Nothing is explained that well either. I watched the show so I know the reasons behind some of the stuff, but for those that haven’t there’s a lot of unanswered questions. Why do Aang’s eyes glow when he uses a lot of power? What’s up with the dragon in his meditation? Why aren’t the people in the Northern water tribe using their power to destroy the fire ships before the fire nation attacks their village? For goodness sake, the boats are floating on water, people! WATER! YOU ARE WATER BENDERS! Also, why all the flair for the bending? In the show, most of the bending was instantaneous and there was no need for the unnecessary dance moves save for a couple incidents. This made bending unbelievable. While the benders are doing their interpretive dance, an archer could just shoot an arrow and kill them.

The world itself is incredibly boring. Everything is so murky and flat. Would it kill Shyamalan to have added some color and brightness to the movie? I just stopped caring part way through and picked up Zookeeper Battle. It is that bad. I heard there’s supposed to be a sequel, but I hope that Shyamalan  has NOTHING to do with it.