Is Toast Girl Worth Your Time?

What Should I Play Toast Girl on?

Toast Girl is available on Android and iOS. As always I prefer gaming on the iPad. 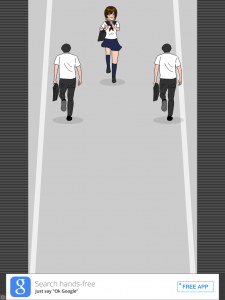 Toast girl is a hilarious riff on an anime cliche. You know the one. The girl protagonist is late to school and she runs out with a piece of toast in her mouth. She then inexplicably runs into a hot guy (sometimes they even accidentally kiss) and bam…almost every high school romance anime you’ve ever watched starts. This follows that route in a ridiculously hilarious fashion.

Toast girl is a very simple game with basic touch controls. You play as the titular Toast Girl and tap the right or left side to avoid people (really one stalker guy whom I have dubbed Stalker-kun) on the screen. As you progress through the different levels it gets trickier to avoid the stalker guy and often you’ll have to wait until the last minute to know which way to swerve. Of course, the game gives you a reason to run into them in the form of a fun little image of Stalker-kun in his many outfits. see him pushing a brick wall, wearing a bowling pin outfit, parachuting from the sky and many more. It’s honestly genius. The controls are tight and you get a nice little surprise at the end of the level. This is also one of the few games that made me notice the background music. It was a ton of fun and you get a fun little bonus when you complete the game. And, it’s free!

SPOILER ALERT DON’T READ BELOW HERE IF YOU DON’T WANT TO FIND OUT WHAT HAPPENS AT THE END. 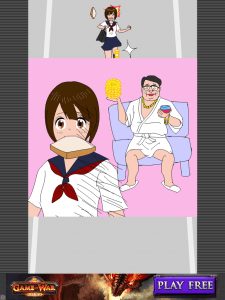 On your third playthrough, you play as Stalker-kun and instead of having to avoid people, Toast Girl runs away from you. It’s hilarious…and kinda sad. As well at the end of Toast Girl’s two levels she runs into what she thinks of as a hot guy. Instead of being disgusted she, unsurpringly, gets all excited about running into him. Contrast the two voice overs when you run into Stalker-kun and Hot Guy.

Stalker-kun: This must be fate! (Kore wa unmei desu yo ne)

No the Hot Guy version

Hot Guy: This must be fate.

I would often find myself tapping the gray edges of the screen to move Toast Girl but be warned that this is a dead zone. If you tap there nothing will happen and you’ll end up running into Stalker-kun. Besides this weird UI choice, I loved everything else about the game.