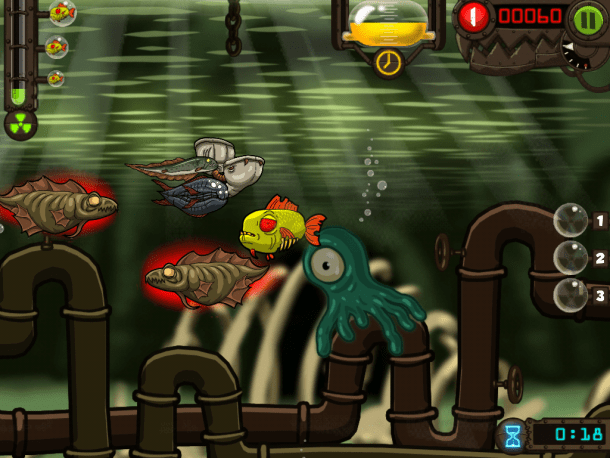 You can eat them, but they can eat you

Zombie Fish Tank is an universal app for iOS 4.3 and later. You get the same great experience with all devices. As always, I prefer gaming on my iPad. 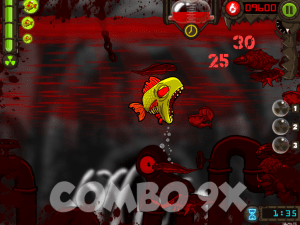 This is a tale of vengeance… Fish Vengeance.

Zombie Fish Tank has you playing a zombified fish out for revenge. They (evil scientists) killed your love, your pond, and even you… Time for revenge. Control your fish with tilt controls through various levels and go from a tiny zombie fish into a master of death and fish type destruction.

I had an absolute blast playing this from beginning to end. This is not a simple game nor a short one. It’s best done in multiple sittings. Most importantly, be prepared to die a lot.  You always start off the stages as one of the smallest fish. As time passes you eat every other smaller fish until you get bigger and then get to eat more. Once you had your fill you go into a berserker mode and just devour everything on screen. It’s fun. What really keeps things fresh are the new enemies you face and challenging boss fights that really push you.

The controls are perfect and intuitive. The levels themselves aren’t very long, but they are satisfying. Sometimes things are mixed up with forced movement and obstacles you need to dodge. The music and art are just great. The music sets the dark mood and ramps up right along with the action. The art is just genius. It’s gritty but clear. Dark, but colorful. It just makes the games awesome. Hats off to the artists behind this one. You did an amazing job. 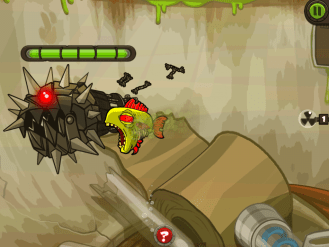 What really seals the deal here are the fun boss fights. Sometimes you need to die a few times to figure it out, but they are always really cool. The design of these encounters is just brilliant.

After each stage you are able to add more fish into your fish tank. Your fish tank can only handle so many fish, but each fish, aside from looking super cool, brings along stat boosts that can help you do better in game. Personally, I just ignored the boosts and just went with what I thought looked coolest in my tank. I love that I don’t need certain fish in there. Well at least I couldn’t tell since I just picked the coolest. You are also able to unlock different parts to your fish tank to spruce it up however you want.

There are in app purchases here, but you never ever need them. 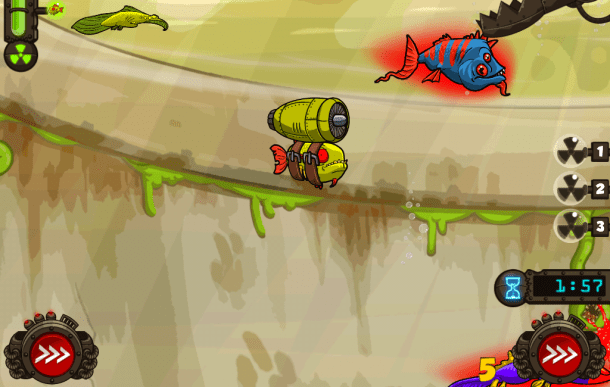 A Zombie, A Fish, And a Jet walk into a bar’s men’s room.

Interesting gameplay that just feels more interactive thanks to the tilt control and the many enemies on screen.  Wonderful art, music, and genius level design just makes this game unique in a App Store full of clones.  Buy this.

Nothing.  This game is awesome.