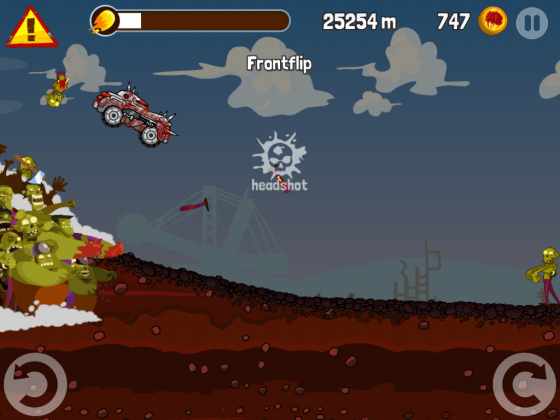 Zombie Horde right behind you. Drive fast, shoot zombies and do flips to survive!

Zombie Road Trip is a universal app for iOS 5.0 or later. Honestly, I can’t imagine wanting to play this on a smaller screen than an iPad 2.  I noticed when I played it on my phone there was a slight problem of my thumb blocking what was coming towards me. That never happened with the iPad.

Lets go for a drive.

Tiny Birds, an endless runner, a zombie apocalypse, a driving game and gymnast walk into a bar.

This is a very addicting Freemium game. Zombie Road Trip is an endless side scrolling game that puts you in the driver seat of someone trying to take as many zombies with him before his inevitable demise. Honestly, at first I hated the game.  It took me a while to get the hang of it.  The first car didn’t flip fast enough and the starting weapon sucked.  In fact you are going to read a lot more of what I didn’t like below. But something kept dragging me back to try a little more.  I upgraded my gun.  It worked a bit better.  I upgraded my car. It felt a bit better.  Then I saved up for a better car.  Night and day. All of a sudden I was flipping like an Olympian.  Zombies were dropping faster and faster and I was making it farther.  Before I knew it I was hooked. Zombie Road Trip has got that I-just-gotta-play-one-more-time gameplay formula down.  Sure it isn’t perfect, but once you get yourself used to things it is dammed addictive.  After spending the last four days with this game nonstop, I have no choice but to wholeheartedly recommend it. 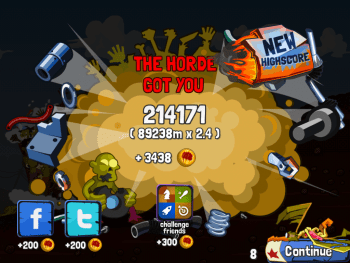 My best run so far.

Good, once you upgrade.  I can’t stress this enough but please don’t hate the game because of the controls when you first start playing it.  Starting out it sucks kind of bad.  But as you get used to the controls and start upgrading it becomes second nature.  I’m not going to say it controls perfect or that the game reads your landings perfectly, but it does get a heck of a lot better.

First upgrade your gun, then car.  Then get the armored car, then shotgun.  Upgrade both and you are good to go for a while.

The art is simple and fun, in the not that dark zombie apocalypse sorta way.  The music and sound effects are the same.  The upgrade system is pretty harsh if you aren’t a fan of in app purchases, but it’s doable once you find yourself addicted enough to the game.  If you do find yourself addicted to this free treasure I do recommend tipping the developer and publisher with the coin doubler purchase. 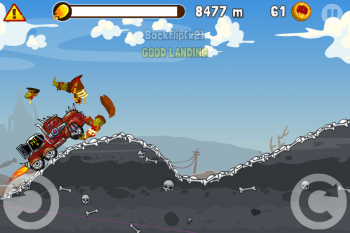 Once you get yourself situated in the right car, with the right gun by your side this game becomes oddly relaxing and exciting.  I just seem to find myself going into a relaxed, zombie killing, car flipping sorta Zen mood.  I only get antsy as the zombie horde draws closer after the inevitable mistake, or bad call on the landing.

Even then it’s like:”Ok Bernardo, calm down you got this.  Just decapitate that next zombie, shoot the one behind him and just do a single flip.  That should give you enough room to go for a double front flip with an aerial sniper shot to get outta danger.”

Yes.  Killing zombies in this game is almost therapeutic.  Once you get the hang of it you can start doing longer and longer runs earning thousands.

My fave part about this is unlike Tiny Wings and Time Surfer, there aren’t any stupid camera zoom ins to distract you and cause cheap deaths because you can see where the frak you are going to land.  Spokko is promising more content with future updates.  I gotta say I’m excited.

Like I said starting the game can be pretty rough.  Also the game needs to do a better job explaining the upgrades. I hate where the cash in lotto tickets button is placed.

If you like his review be sure to check out the rest of our app reviews HERE!