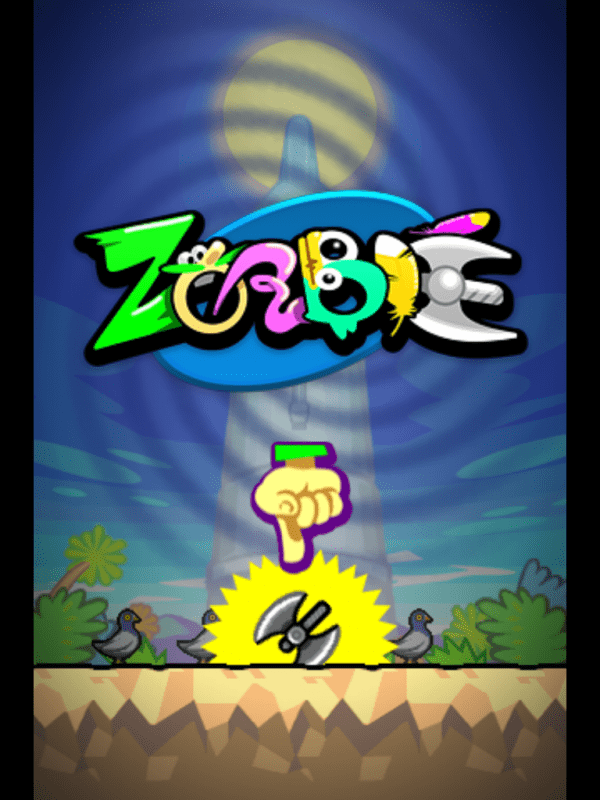 Zorbie is a universal app for iOS 4.3 or later. I played it on my iPad and iPhone 4 and didn’t enjoy either. 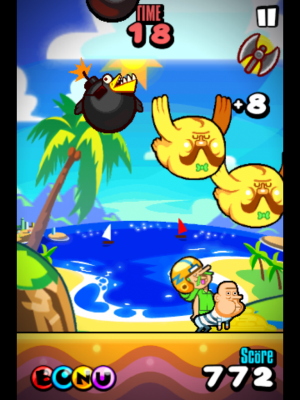 Whats up with the black bars on the side of my iPad screen?

Zorbie just got out of prison and, with his trusty axe,, wants to earn himself a free meal.  The game has you using your finger to swipe left and right to move Zorbie and pressing and holding him to charge up to shoot his axe in the air.  The point of the game is to knock as many birds and bosses out of the sky as possible for food.  Unfortunately, the controls aren’t precise which leads to frustrating misses and fails.  The game has a lot of  very blurry art that looks almost kiddy, but then has a character named Dickhead that you ride around the screen.  Zorbie would be a very interesting casual game if it wasn’t for the ridiculous short amount of time you start off with.  You need to upgrade a good few times to be able to raise the allowed time to make the game somewhat fun.  By then you are pretty much burnt out. I feel like the developer knew the game was shallow and decided to set up artificial upgrades by tacking on a very short clock.

Zorbie is in no way worth its $2.99 price tag. There just isn’t enough gameplay to warrant it and the in-game visuals are a sad mess. The game just doesn’t have that fun pick up and play replay value. 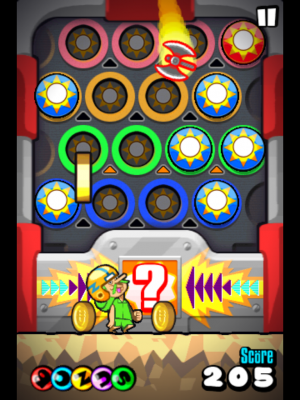 The graphics look better than they really are.

Not well… When you first start playing you find that you are given a pitifully short amount of time to play. To make matters worse, the character that rewards you with a meager extra ten seconds doesn’t show up much at all, leading to my friends and I constantly saying “That’s it?”  After a while you slowly are able to raise the amount of play time but it takes a lot of grinding.  Zorbie really needs a dedicated charge launch button.  As is now, when you go to move him you end up charging a shot or when you want to charge a shot you end up moving.  It’s very frustrating.

The art while interesting is very blurry. Also it doesn’t fill up the screen.  The music is decent but forgettable.

The longer you play you are rewarded with different bosses, weapons and enemies, but unfortunately it feels like this wasn’t tested out. Some weapons are totally useless against certain bosses.  So if you are forced to equip one right before a boss battle you find that you just need to wait until the weapon disappears before you can fight the boss wasting more precious time.  Also, your axe has a tendency to stay up in the air for a long while killing birds, which would normally be a great thing. However, since the character that allots more time is on the ground you will find yourself helplessly watching as the game time runs out over and over again. To fix this it would be nice if your time was increased as you chain together combos when your axe is doing its thing to a flock of birds.

There is just not enough here to justify the $2.99 asking price.  Even it was was just a .99 cent game Zorbie is just not that fun.  It’s insane that you have to grind an hour or so just to upgrade your play time so you can then try and start progressing. Then of course there are the useless weapons against the bosses.  And for heaven’s sakes what is up with the muddy graphics?