Is My Teen Romantic Comedy Worth Your Time?

My Teen Romantic Comedy is available for streaming on Crunchyroll.

This is a review for the first season of the show.

There will never be a shortage of the cliche high school romantic comedies, which is what makes My Teen Romantic Comedy stand out even more. It’s an excellent look into the world of the social outcasts of high school with a little humor and, yes, romance peppered in. 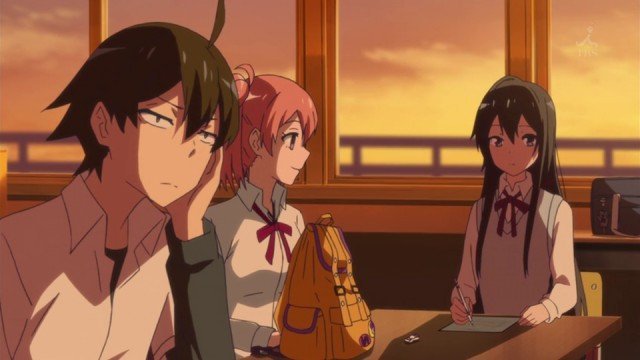 While there is certainly more anime coming out about the weird and socially stunted people of the world, the fact remains that all of these characters want to be a part of the “in” crowd so to speak. None of them really revel in their aloneness as much as Hikigaya, the main protagonist of the show. As much as others don’t like his methods to solve problems, in the end they always get the results they want. Hikigaya himself doesn’t see any reason to change himself as he likes the way he is. Sure, it’s a defense mechanism against all of the teasing and bullying he experienced ever since elementary school, but ultimately he’s comfortable with who he has become. Plus, beneath those “dead fish” eyes, he still is a good person and does want to help others, even if that means throwing himself under the bus. His unshakable resolve in his methods, beliefs and ultimate good guy persona is what attracts other people to him despite what they might say.

As dissimilar as they might seem, he and Yukinko (the other main character) have quite a bit in common in terms of thinking, being able to understand people’s intentions and ultimately speaking out bluntly. They both clearly admire each other to a certain extent and while it seems like there could be some lead up to romance, it seems more like they are becoming friends more than anything else. The actual person romantically interested in Hikigaya is Yui. At first she seems like the typical ditzy, happy girl but it turns out that while she’s good at reading the mood she isn’t assertive and has problems speaking her mind. What makes this show stand out is that it really illustrates the complexities of these characters. They’re not just one-dimensional jerkass, ice queen and genki-girl – they each have good and bad points to their personality. Seeing them as they maneuver their high school life and their budding friendship with each other really makes this anime a cut above the rest.

This might be considered a romantic comedy, but it’s more of a slice-of-life show than anything else. Yes, there are some funny moments, but you’re ultimately seeing the world through Hikigaya’s bleak viewpoint. As for romance, Hikigaya is so opposed to falling into the trap of love that even when it seems obvious, he chooses to ignore it for fear of getting his hopes dashed again. Sure it seems like he has feeling for Yui but for the most part it’s not really a focal point. Rather than “love” the show is more about relationships in general. The artwork is well done from the character design right down to their facial expressions.

Honestly, nothing. My Teen Romantic Comedy hits all the right notes.