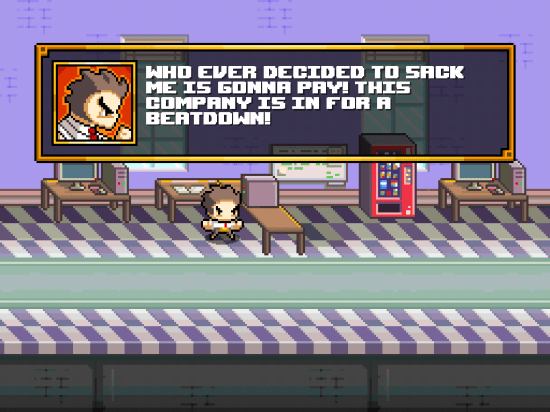 So you have just been fired, what to do?

Beatdown! is available on the iPad, iPod touch and the iPhone iOS 4.0 and later. You get the same great experience with all devices. As always I prefer gaming on my iPad 2. 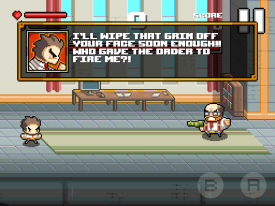 This is a pretty fun side-scrolling. beat ’em up. The controls are spot on. The plot is funny and the animation is retro cute. Oddly the tone is on the mature side for a game that is pretty easy to beat in a single sitting. It isn’t too long, but it makes up for it with endless modes. I’d say it’s totally worth the .99 cent price tag. Thankfully it doesn’t have any in-app purchases. I recommend buying this game.

The control for Beatdown! is perfect. The jump and punch buttons are stationary but the direction joystick on the left side of the screen was so perfect it felt like I was playing with a real controller.

Character animations are funny and the reaction is spot on. Oddly the bosses while funny aren’t very memorable. I was really hoping for a challenging final boss but he didn’t prove much of a challenge for me. 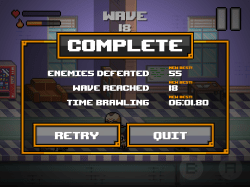 When you just want to zone out & Beatdown!

In Beatdown! you are the star in a story of revenge against the corporate machine. As someone who was just fired, I have to admit it added a bit more fun and humor to the game for me. But Beatdown! is great for anyone. There’s funny story filled with dark humor, the best beat ’em up controls ever on the iPad, interesting enemies and an endless mode to enjoy mindless action long after you have breezed through the story mode.You really are strong in this game. As long as you pay attention to the movements of the baddies you can kick butt all the way to the end. This is one of the few beat ’em ups where the enemies you face aren’t cheap. In way too many of these games you are swarmed by opponents that are just made to crush you (Considering that most of those early games were first arcade games meant to eat your money it makes sense). 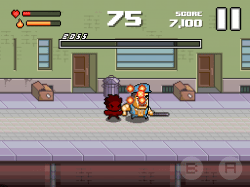 Wait until he is winded

Crashes! When I was playing through the story mode the game would crash every other level. It totally destroyed the flow. Every time I got into the game it crashed. Thankfully, the level progress saved so the next time I started the game I just had to restart the level. Considering how short the levels are it’s not really a big deal. Yes it’s fun, but the story mode is a bit on the short side. There is an endless mode to round out the app, but I really was hoping for some more. Maybe some more office related bosses, to really keep the theme going (HR, CTO, IT, etc, etc). Instead we had ninjas and army folk out of nowhere. It felt more like a mish mash of ideas than a coherent story. I’m not saying I didn’t enjoy suddenly taking out ninjas and zombies. I’m just saying I wish they were written into the story better.

As dark and angry as the tone is the game is almost kiddy easy. There are never more than 5 baddies on screen at once and you can easily round them up and take them down without much of a fuss. This was a pro and con for me since a lot of classic beat ’em ups often were just cheesy cheap. With enough skill you can beat Beatdown! without much trouble. You definitely get that tough-guy-butt-kicker feeling, but I was left wanting more of a fight out of the bosses.

Here is hoping there is a content update about our hero getting fired from his new temp job at the Ninja Zombie military agency.

Woblyware & Ravenous Games are known for fun quality games. I have no doubt whatsoever that the game crashes will soon be fixed through patching. Since I haven’t had the crashes happen to me yet during endless mode it’s not a game breaker. 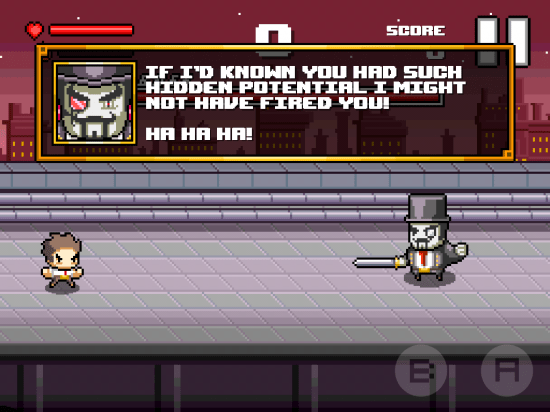