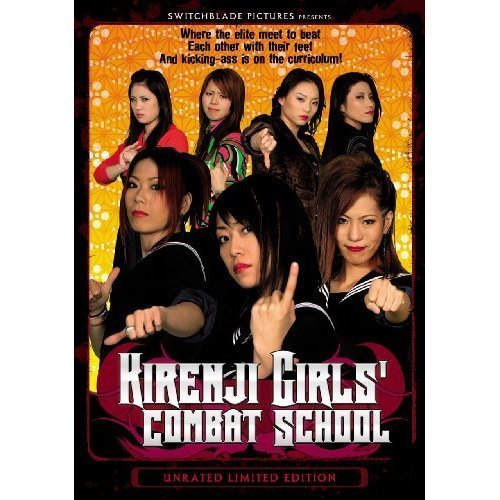 Based on the manga, anime and live-action Japanese movies I’ve watched, I have to say that I would never want to go to school in Japan. Every day is a fight to the death. After watching Kirenji Girls’ Combat School, I am even more inclined to think that the Japanese schools are fronts for underground fight clubs. The movie itself was pretty awful. The effects were bad, the acting was pretty terrible and, well, it seems like it was a school project. There are also NO SUBTITLES so if you don’t understand Japanese you won’t be able to follow what little plot there is. That being said, if you’re looking for a movie to just crack jokes at and be drunk to, Kirenji Girls’ Combat School definitely fits the bill.

It’s hard to name all the reasons but I’ll try. There is, of course, the lack of subtitles. I was (un)lucky enough to be able to understand what was going on so I tried to translate to Bernardo what the girls were saying. It didn’t really matter as the plot was just ridiculous. It also would appear that the Amazon Prime version did not start from the beginning of the movie but 20-30 minutes into the movie so it was even harder to understand what was happening. It’s pretty obvious that there was no budget to this movie, but I’ve seen a lot of no-budget movies that were a heck of a lot better than this. The acting was bad, the choreography was blah and the high school “girls” looked like women who were at least in their 30s (and I’m being generous). I mean, I get that the school is a combat school, but why would teachers allow their students to beat each other up to the point of near-death? Where’s the education? Even the friend of the three main girls doesn’t do anything after the three girls have beaten each other up to a pulp in a fight. No. Instead she says “You guys are so amazing!” REALLY?

At the end, we learn why these girls are fighting and the purpose of the school, but it doesn’t make any sense. And then after what seems like the conclusion, the movie continues! Kirenji Girls’ Combat School is way too long, has no idea what it wants to say and overall seemed like a poor attempt to make a manga-style live-action movie. Sure, I had a good time making fun of the movie, but it’s definitely not something I’m going to rent again and certainly not something I’m going to recommend to friends. Oh and worst of all, the main girls weren’t even that attractive. There were only two attractive girls and they probably only got about 5-10 minutes of actual screen time. If you’ve got a movie this bad, there should at least be eye candy.

This is definitely not worth your time on Amazon Prime.