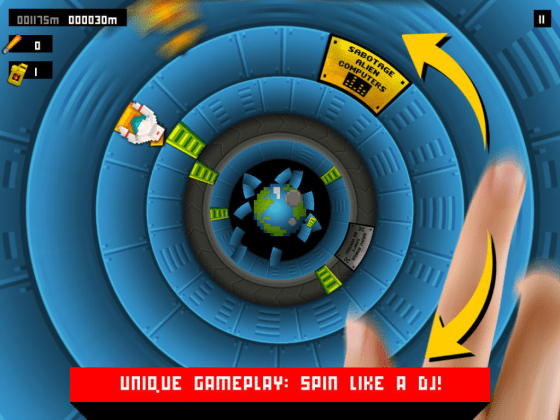 Spin Up! is available on the iPad iOS 4.3 and later. I wouldn’t recommend this on the iPad mini.  You want as much finger real estate as you can get with this game. 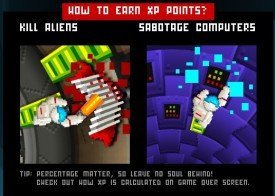 Spin Up How To

I’ve heard a lot of good things about Spin Up! and I have to say I’m pretty disappointed.  Spin Up! is an endless high scoring game.  It’s like an endless climber from a top down perspective.  You control by spinning the areas you are on and are planning to go on.  You get points by smashing monitors and can pick up weapons and boosts.  The more you play the more you permanently level up yourself with new stronger characters that last longer.  Spin Up! sounds great on paper, but in practice I find it repetitive and boring.  It’s only .99 cents, but that is .99 cents you should spend elsewhere. Sadly there isn’t a light version of this that you can try out and see if it’s your thing.

The controls are perfect and the graphics are ok.  Sometimes I find that some enemies can be a bit hard to see when it gets hectic, but besides that no real complaints.  I would love to have a glossary page for the various enemies you encounter in the game.  When I first started I couldn’t tell a power up from what was trying to kill me.

Spin Up! definitely nailed the feeling of progression.  The more you level up the stronger your character and weapons become leading to much longer games.

I wouldn’t say Spin Up! fails at all.  It just doesn’t do it for me. The controls are great, the premise is really interesting and the idea is new and fresh.  For me Spin Up! would have been a great mini-game in between levels of some other game.  Maybe some way to climb floors in a space station in between the action.  As is, it’s just too repetitive for something that really doesn’t do it for me.  Add to that I was really squishy when I first started out and it got frustrating fast.  Now that I’m leveled up a good bit I last longer, but it’s still just not fun for me. 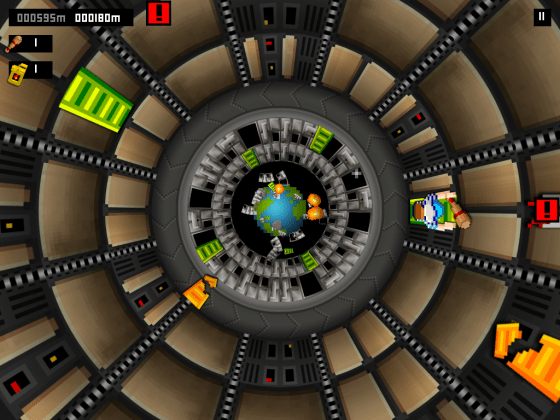 Check out the rest of our App Reviews here!

Buy on the App Store!