Teenage Mutant Ninja Turtles Rooftop Run  is a universal app for iOS 4.3 or later. Trust the user reviews about the game crashes. I have had the game crash on both my iPad and iPhone. This game has been a bug filled mess since launch and it hasn’t gotten any better. In the latest update the game can’t seem to count how many coins you have earned properly. This is a huge letdown.

Teenage Mutant Ninja Turtles Rooftop Run is a mediocre side scrolling, endless runner with purposely simple mechanics that do more harm than good. The worst part of the game is that it’s obviously based on the Freemium formula but has the nerve to charge $3.99 up front for no reason. Once you start up Teenage Mutant Ninja Turtles Rooftop Run you choose between the four turtle heroes you want to play. If you want to play with another turtle you need to unlock them… And so starts the nickel and diming or “grinding” starts.

At the end of the day the game just isn’t fun enough and doesn’t have enough replay value to justify the initial $3.99 price tag. Honestly, this is one of those games that will be totally free and just as forgettable in a few months time.  If you are interested in trying this game I say wait until it’s totally free.  As a long time fan of the franchise I’m just surprised and disgusted that Nickelodeon chose the route of a horrible cash grab game. It’s says a lot about the company that it would try and nickel and dime its fan base in such a way.  Even after a few updates the game is still a buggy mess. I’d expect this from a small time developer and a new franchise, but in this case there really is no excuse for the horrible greedy mess that is TMNT Rooftop Run. The people behind it should be ashamed of themselves. 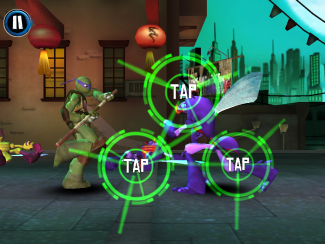 Turtle Time just interrupts the flow of the game and gets repetitive fast.

The controls for Teenage Mutant Ninja Turtles Rooftop Run don’t work right.  You have one tap controls for most of the game. While it seems like a good idea in theory, it is a sad mess in reality. Too often you will find yourself attacking when you want to jump, and vice versa. Separate attack and jump buttons would be a godsend to this mess. Unfortunately, the poor controls are paired with even poorer hit detection. Sometimes you kill the baddies, others times you get hit. There isn’t any skill in the timing of your hits, it’s more about the game allowing you. How the heck did this pass quality control? Seriously?

The next huge problem is the cost for everything in game.  It’s just wrong. I could go on and on about the bugs and problems Teenage Mutant Ninja Turtles Rooftop Run has, but honestly the game doesn’t deserve it. I just want to finish this review fast so I can delete it. Teenage Mutant Ninja Turtles Rooftop Run is just a horrible game that should be avoided at all costs. I would never allow a child to play such a blatant cash grab. Parents should be outraged that this game is being targeted towards children.

Don’t support this game with your money. This isn’t even a half decent endless runner, it’s a broken endless runner that shouldn’t have been released. I can’t believe this is a Teenage Mutant Ninja Turtles game. This is the worst game I have ever played from this franchise. Nickelodeon should be ashamed of themselves.